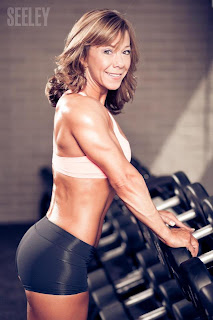 
After not placing too well at the NPC Rocky Mountains in November, Toye Nigey brought a much improved package to the NPC Northern Colorado's and took second in both Novice and Masters. She knew she had to come in with a tighter and leaner package, and took the appropriate steps to do so, the sign of a good competitor. After starting with figure, she made a smart move in switching to physique, and with more work, those second place finishes can very easily become first place finishes.

Q: What made you decide to try competing?
A: I turned forty and had had a couple of kids and fallen off the wagon as far as the gym was concerned. I decided that I needed a goal so I decided to try a competition.

Q: Why did you go with physique?
A: I actually started in figure. I had done three figure competitions and placed in all of them. The judges always told me that my body shape was better suited for physique. I took a year off and spent time bulking and then went into physique. I didn't place at all the first time, which of course lights a fire under you. I took six weeks off and hit it again and did the last one in April and placed second. 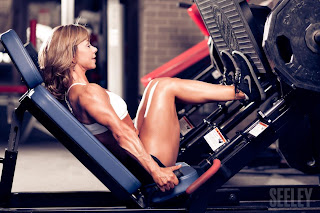 Q: November you took ninth at the Rocky Mountains and then recently took second in masters and Novice at the Northern Colorado's and looked so much better, where do you feel you were better?
A: I think I spent more time dieting and focusing on leaning the areas that I have trouble with, which is typically my lower half.

Q: You did look a lot leaner, did you do something specific to help with that?
A: I actually started my diet a little sooner than the previous show. I gave myself an extra three or four weeks of dropping my calories and paying attention to how that affected my leaning in my lower half. I also increased my cardio.

Q: Did you know going in that you looked better and would do better?
A: I knew I was gonna do better but it is like all my friends say "it really depends how you place on who shows up."

Q: You are obviously happy with a second place finish, but do you walk away at all thinking "what do I have to do to get first?"
A: I think you always feel that way when you walk away with anything less than first place. But I am the kind of person that that motivates me to do better. You just look at the pictures of the person you were competing against to see what the judges want, but really it comes down to what the judges see as what they want for that show. 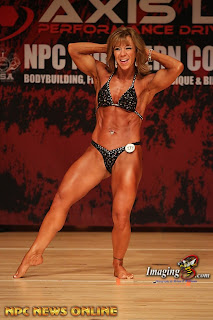 Q: Your posing also looked a lot better, did you spend more time practicing posing?
A: I think because it was my second show in physique, I just felt a lot more comfortable with what I was doing.

Q: For people who maybe don't follow the sport as closely, can you explain to them how important posing is?
A: Absolutely! If you walk out on stage and look weak and scared and not confident of yourself, the judges will see you that way. If you spend a little extra time with your posing, especially in the gym where you can have big mirrors and see the full picture of what it is that they are seeing, I think that helps. Plus, posing in itself is a workout, people don't realize that. If you stand on stage and hold poses for three to five minutes, that is a serious workout and you can really cramp up and hurt yourself on stage if you are not prepared, and at times, you can even pass out from it.

Q: Do you know when you want to compete next?
A: I actually have been talking to a trainer, a really good friend of mine, about that. I wanna do a Jr. National show. Now that I have placed top three, we are considering that. The judges I spoke with said I need to be a lot harder. That, for me, I don't know how to do that, I really put everything I had into that show, so I guess I have to hire somebody to help me. So probably a Jr. National show, not this summer but possibly next summer.

Q: From the last show, where do you need to improve?
A: My legs and my butt. They are never as lean or tight as I want them to be and I need to figure out why that is. 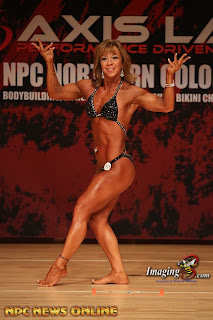 Q: When you are in the gym, do you get the stares or attention from people?
A: Yes, I actually have a lot of people approach me. Sometimes it's negative and sometimes it's positive, it depends on the individual. Most of the time I get a lot of really positive comments as well as questions from people on how to do certain things.

Q: When people do ask, when they do it at the wrong time, like the middle of a set, does it get frustrating?
A: You try to stay positive and understand that they are asking because they are impressed by how you look or how you workout. You try and stay positive for yourself and for them, but it can be frustrating.

Q: When you are out in public are you more of a cover up and avoid attention or proud and showing it off?
A: I am a proud of it person.

Q: If you could spend a day training with someone you have never trained with before, who would it be?
A: Arnold Schwarzenegger. He is an icon in bodybuilding. If I were able to talk to someone who did it old school, you would get a lot of responses that you don't get from new trainers. 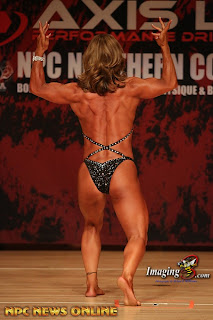 Q: Anyone you want to thank?
A: I would love to thank my husband and children for putting up with me on those carb depleted anger days. My trainer for the last show, Ken Baldwin. He is amazing and I would recommend him any day of the week.
Posted by JasonDBK at 5:59 PM