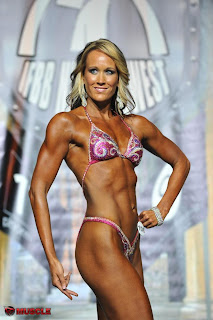 
What do you do when you don't do so good at your first show? You do what Lauren Hawkins did. You take the time to make the needed improvements and come back better the first time. What is even better is if you do like Lauren did and win your class. Lauren made a remarkable improvement in doing so and definitely is someone to keep an eye on.

Q: Can you talk about how you got started in the gym?
A: I was an athlete my whole life. In college I majored in Exercise and Sport Science. So I have been in this industry since college and been training and teaching classes for over a decade.

Q: What made you decide to try competing?
A: My girlfriend Kelli about a year and a half ago said she had this on her bucket list and convinced me to do it with her. I really did it just to support her and bond with her and give ourselves a goal.

Q: Did anything about the prep process surprise you?
A: I think for me and my body type, I thought it was gonna be worse. I put myself through the ringer when really I shouldn't have bee dieting so hard. I didn't need to do one extra minute of cardio or anything just because of my body type. So I was a little to tough on myself the first time around and learned some lessons from it. 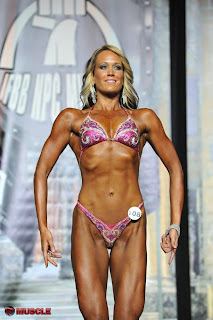 Q: A lot of people I interview say after the first time that competing becomes like an addiction, was that the case with you?
A: At first, no. I didn't do so well at my first show. Being so competitive, it was a big knock to my ego. It was "I'm done, I tried it, it's not for me." Then two or three weeks later, I missed the goal and became somewhat obsessed with a new goal, a show that was far enough in the future that I can make changes but close enough to where I knew I was gonna do it.

Q: When you don't do well at the first one, is the next one more hoping to not do as bad as the first or more like you know you will do better?
A: I knew I was gonna do better. I knew there was nowhere to go but up. I knew that I had the knowledge to do what I needed to do. It was just a matter of implementing it. So, there was eleven months between shows, plenty of time to make the changes I knew I had to make to have a different package.

Q: You won your class at the NPC Midwest, how happy were you?
A: I was beyond happy. I didn't place my first show so standing up there in the middle with that medal around my neck.... I got first in Novice and wasn't gonna do Open, and decided to do it and was so proud of myself for stepping back on stage and doing it. That moment was huge for me and validated the last eleven months of hard work.

Q: Physique-wise, where were you better?
A: I had a lot more muscle to me. I am 5'10", I am tall, so it is hard to get it on me. I focused on my back and shoulders and became obsessed with training them and it paid off big time for me. It was well worth the effort.

Q: You knew you would do better but did you think winning was a realistic possibility?
A: I didn't know what the competition would be like and how the judges would judge. Going in, even the day before, I said if I could break the top five then I would know I have what it takes to keep going on. At the competitors meeting, some of those girls scared me, I am confident, but they oozed it, looking at their physiques under their shirt, I was second guessing myself. Once I got there the day of, it became tunnel-vision, I wanted to be in the middle, first in my class and became focused. 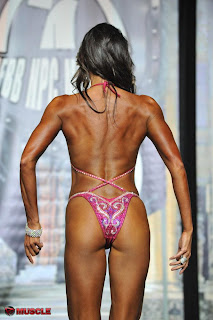 Q: From pictures you looked confident, were you that confident?
A: I am more confident in general in front of a lot of people than one on one. I am in front of women all day long teaching classes. On stage it is like "fake it till you make it." If I am confident and hold my head up high, they will believe it, there is nothing fake about it. Was I little nervous? Absolutely! But I knew I had to keep my head up and keep it together and show that.

Q: Your posing was good for a second show, did you put a lot of practice in?
A: I did! My first show I thought I had it together more than I did and I trembled. In that show they held us in our poses for a lot longer than this show. In my mind I was preparing myself for that seven or eight minute comparison and practiced and practiced and practiced. I am in a small town and don't have a coach, all I could do was watch videos and look at pictures and learn from them. By the time I got on stage, I knew where I needed to be.

Q: Can you talk about how important posing and looking confident is on stage?
A: They see it, it is written all over your race. They see your body first but it is all about your body language. Having that confidence and your head held high and your shoulders back, that is once of the most important things I see when I see these pros. I notice that before Is tart taking apart body parts. I am tall and have to own that. When I took those first few steps, I didn't want them to see "she is this tall scrawny whatever", I wanted "she's tall, she's proud of it, her chest is out, her head is held high." Then everything else falls into place. I think it is that self-doubt that can get into your head during doubt that can wreck you on stage if you don't have that confidence behind your poses.

Q: Do you know when you want to compete next?
A: I do! I qualified for Nationals which was amazing. I wanna be realistic and put my best foot forward. I know there are more changes that I want to make, add size, grow before I hit a National stage. I am looking for the show in Ft. Lauderdale in November which gives me time to make some serious changes. 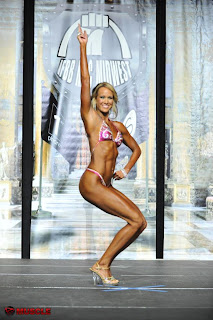 Q: Are there specific parts you want to improve?
A: I wanna continue growing my shoulders and back. I am so tall and I don't want that stick figure, I want those broad shoulders. Also my judges feedback was more size in my legs and that is something I have not focused on because I naturally have lean legs. Maybe that will give me more balance.

Q: When you are in the gym, do you get any of the stares or attention from people?
A: I do! It's interesting because where I work is actually a community center and is funded by a church. It is different than other gyms I worked at, different vibe. I stick out in the weight room because there aren't a lot of women in general and then I am throwing around some heavy weight. The other gym I bounce into because it has some cool equipment is on a Military post. It is ninety-five percent guys and here comes this tall girl and I start taking off some layers and throwing around some big weights, it creates a little bit of a commotion. Sometimes it fuels me to lift more, I am in front of people and helps me throw a little more weight.

Q: If you could spend a day training with someone you have never trained with, who would it be?
A: It has got to be Erin Stern. I went to school at the University of Florida, she is a Florida Gator. Florida girls have a thing with each other. I am a little taller than her, but she is gorgeous, she has the whole package, she is the one I wanna look up and see how she walks on stage. For sure, she is my biggest role model. 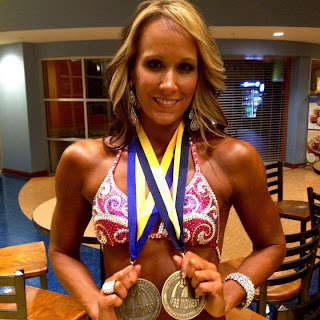 Q: Anyone you want to thank?
A: My girlfriend Kelli. She is the one who got me into this crazy world of competition. I feel like I have become a stronger trainer, friend, instructor, mom, everythign because of it. I would have never done it without her, she is the sole reason I got into it.
Posted by JasonDBK at 3:24 PM