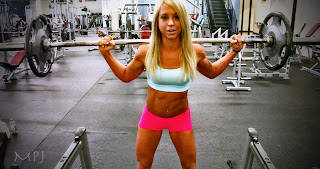 
Sonya Urff decided to do the Jax Physique with her sister who had already competed before. She won her class in Bikini, a very good class at that. Pretty impressive for a debut. As with her sister, Sonya has the right attitude about the sport, competing and improving and has a lot of time to improve and become a real name in the fitness industry.

Q: Can you talk about how you got started in the gym?
A: Growing up, my parents always had my sister and I active in sports, soccer, gymnastics, dance, cheerleading. In high school we kind of stopped doing our outside activities. We both talked about how we didn't wanna become lazy. We decided on a drive home from school one day that we wanted a gym membership. We started at the YMCA and doing cardio together. We were doing too much cardio and she developed an eating disorder, more focused on burning calories than eating calories. We went to a nutritionist and she slowly stopped doing cardio. I continued doing cardio, but the thing is, cardio gets addicting. I did more and more and more. Kyrsten found her passion in the weight room while I was in the cardio room running my little heart out. Eventually I would go into the weight room and do some. I was never in there the same amount of time she was. Eventually I saw all the muscle she was putting on and decided I like that look better. I started watching her and following what she was doing. I saw her as my new role model in the gym.

Q: What made you decide to compete?
A: I always was fascinated by people who did compete. I thought it was something neat that I wanted to try. After Kyrsten did her first show everyone was saying "you should compete" but I never thought I would be able to with school because I am a double major. I never thought of myself having time till after I graduated. I started thinking about it and was sure I could manage my time to study and am always in the gym anyway, same amount of time as Kyrsten, I eat healthy, so I decided to go for it. I decided to show people I could do school and compete, a challenge to myself. 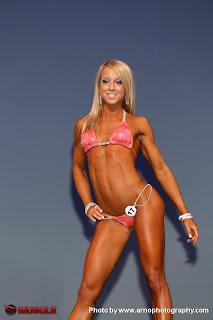 Q: How nervous were you for this first show?
A: I was pretty nervous. I didn't know what to expect. Kyrsten's first show was smaller. Everyone said "they are gonna do Jax, such a big show against so many people." I didn't know if my posing was gonna be right cause I didn't practice as much as I wanted to. I was nervous posing on stage and being in front of everyone. Once I got up there I forgot about everyone and it came naturally.

Q: Still being so young, is it hard to pass up the partying type lifestyle people your age live to live this lifestyle?
A: Growing up my parents were really strict on partying and going out. When I first came to UF, I thought I was gonna join a sorority and didn't know how party oriented it was. When I first joined, there wasn't as much partying as I expected. I didn't feel the need to party, it offset what I did in the gym if I would go out and drink. That has always been my mindset, so I have no interest in partying.

Q: You won your class at the Jax Physique, if someone said beforehand that you had a shot at that, would you have believed that?
A: Probably not! It was my first show. I knew there would be a ton of people. My main goal was to get stage practice, so when I heard I won, I was kind of shocked, I didn't know what to do so I just stood there and was like "did you say my number?" It was a good surprise.

Q: When they are doing call-outs and you realize you do have a shot, did you get any more nervous?
A: I did, but I didn't know how critical it was or if it really meant anything. Everyone was like "it means so much, you have a shot" and I was like "I don't know", I still wasn't believing them. 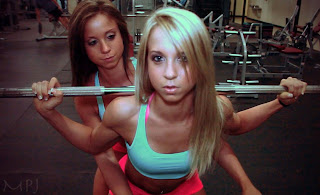 Q: Your sister did the show with you and had competed before, how much did it help to have her going through prep with you?
A: It definitely was a lot easier. Without her doing it, I don't know if I would have made it. If I would have, I wouldn't have been as successful. She helped mentally and physically. It was easier having her there, we ate at the same time and the same thing and were feeling the same way and having the same lack of energy some days. It was definitely good. Having her support is something I that without it I wouldn't have been as successful.

Q: Do you know when you wanna compete next?
A: I haven't quite decided. I want it to be sometime soon, a National qualifier. I was shooting for Palmetto Cup, I am still talking to my coach about it.

Q: For the next one, where do you feel you need the most improvement?
A: Probably my legs. I need my legs to grow. They weren't big enough on stage. I need to definitely work on my posing.

Q: Your sister started in bikini and moved to figure, would you consider that down the line?
A: I told my sister I would never compete against her. It is something we promised each other because we already are so competitive. When she decided to do figure, that is when I figured it was o.k. to do bikini. I would never do figure unless she moved up to physique, and even at that point I would have to sit down and really consider it. 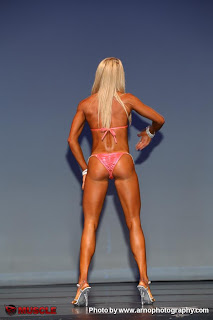 Q: Is fitness modeling something that interests you?
A: It does, but I never really expect it to go anywhere. I know how hard the industry is. If an opportunity came up I would definitely be interested. I just know you can't get your hopes up.

Q: When you are in the gym, do you get the stares or attention?
A: I have noticed it a few times, especially other girls. A lot of times other girls look at us like "why are they lifting so heavy?" They are afraid they will get bulky there is the whole thing out there that girls don't like to lift heavy cause they are afraid they will look like men. Sometimes I notice girls looking at us intrigued and surprised by us lifting so heavy. I see guys looking sometimes cause they have never seen girls lifting like that. There are times when people make it extremely obvious, but I just tell myself to ignore it cause they are either trying to figure why we lift so heavy or they are impressed.

Q: If you could spend a day training with someone you have never trained with before, who would it be?
A: Probably Jamie Eason. She seems like she has a good head on her shoulders and is my role model. 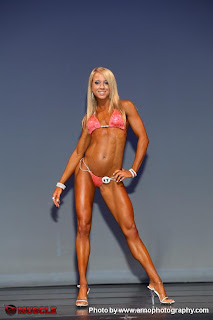 Q: Anyone you want to thank?
A: My sister Kyrsten, she has always been by my side rooting me on. Sarah Long for helping me mentally and physically. Lynard Dicks has been by my side since I decided to compete lending a helpful hand even when sometimes I said I didn't need it. Also, my parents for supporting me to do both school and competing even though it is something they didn't really want me to do. Complete Nutrition in Gainesville for helping give me opportunities to fund my endeavors this year.
Posted by JasonDBK at 3:31 PM