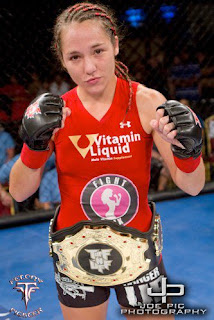 Q: You are on an island with Snooki, Hulk Hogan, Pee Wee Herman, Dana White, Nancy Grace and Betty White, who gets voted off first?
A: Oh man. Nancy Grace wouldn't last a minute. I think I'd be cool with everyone else you listed.

Q: Who gets voted off last?
A: Betty White all day.

Q: You are alone on that island, what three items do you need?
A: I'm assuming basic survival items are provided so... My surfboard, cupcakes and Jake Ellenberger ;)

Q: Crunchy or creamy peanut butter?
A: CRUNCHY Almond butter please (with some Nutella on top)

Q: Favorite board game?
A: I used to love Clue. Haven't played it in years though.

Q: Best flavor jelly bean?
A: Jelly Beans aren't my thing. If I'm ever unsure I usually go with the red colored candies though.

Q: If they made a movie of your life, what would it be called and who would play you?
A: Dichotomy - with Jessica Alba playing a much hotter version of me ;)

Q: If you couldn't fight, what other sport would you wanna participate in?
A: Fighting??? But if I couldn't be involved in it at all for some reason then... Geez I don't know... Kickboxing, Boxing, Jiu Jitsu and Wrestling!!? Hahaha. I'm pretty stuck on fighting as you can see.

Q: If a restaurant made a sandwich called "The Jordan" what five items would be on it?
A: First off, it'd probably be a desert tray named "The Jordan" & it would include Chocolate Lava cake, Red Velvet cupcakes, Pecan Pie with ice cream, Reese's Peanut Butter Cups, and Heaven which would be all of those mixed together with some chocolate and caramel sauce and whipped cream on top.

Q: Best book you ever read?
A: That's tough because I love to read and I've fallen in love with so many different books. I remember being incredibly sad and feeling like I'd lost my friends when I finished The Lord Of The Rings books and would turn back to random parts of the books and reread them to ease my sadness. It was like I was revisiting my good friends! (Yes, I was and still am a nerd)

Q: Creepiest, funniest or weirdest Pick-up line anyone ever said to you?
A: Not sure if you'll wanna print this but this definitely takes the cake so - A dude came up to me all stressed out looking and was like "My dick died!!!!" and I was a little stunned but decided to play along so I said "Oh no!" Then he said, "Yes I know, it's terrible... Can I bury it in your ass?"
Wasn't effective but damn did he get points for creativity.
LOL

Q: One fighter whose fights you always have to see?
A: Jake Ellenberger, Jessica Penne, Kaiyana Rain... There's a lot of them actually.

Q: One celebrity you would love to head kick?
A: Only one? There's more than a few but the first that comes to mind is Honey Boo Boo's mother.

Q: Worst movie you ever saw?
A: If it was bad I probably didn't watch much of it. I remember being kind of pissed when Anne Hathaway's character got hit by a bus in "One Day". Completely unnecessary!

Q: Favorite cartoon character?
A: Again, too many to pick just one!! First that comes to mind is King Julien from Madagascar or maybe the squirrel from Ice Age

Q: Sight, smell, hearing or taste, which would you be most willing to give up?
A: Smell. Since I've never had a very good sense of it anyways.

Q: If they made a horror movie using fighters, who would play the psycho killer, the naive non-believer, the goofy guy who tries to be the hero but keeps messing up and the girl who destroys the killer at the end?
A: Psycho Killer - Fedor
Non Believer - Rick Story
Goofy Guy - Matt Riddle
Girl that Destroys the Killer - Me of course

Q: Why are the Kardashian's famous?
A: Because our society has a sick obsession with rich "beautiful" people living in this supposed "elite class" where money isn't a thing and people look like they woke up with full hair and makeup done. Conversely we also like watching bad shit happen to these people. The Kardashian's have played on this well and are all over our TV's, magazines & billboards now because of it.
Posted by JasonDBK at 9:25 PM