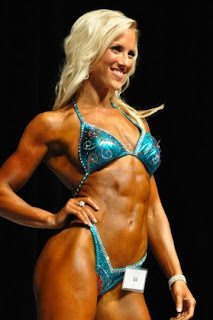 Shannon McMillan is about to return to the stage in the quest for a pro card. Competing was almost just like the next natural step for her with fitness being such a big part of her life. In a short time she has done very well in that next natural step. With some improvements she worked on, that pro card can be a very realistic possibility.

Q: Can you talk about how you got started in the gym?
A: I majored Kinesiology in college so I have my Bachelor's of Science in that and my major was a Fitness Specialist. I got certified as a personal trainer. After college I came home and started working at a local Health and Wellness club and training there. I had always worked out which is why I went into that major. I have been athletic, danced, did track.

Q: What made you decide to compete?
A: There was a trainer at the gym I was working at about four years ago. She was competing and I thought it was so cool that she did it and I always wanted to but I didn't wanna settle down. I was twenty-five and still liked -and still do- to go out on the weekends. I knew it was gonna be a lot of discipline so I put it off for awhile. Finally last year I decided to do it. I decided to take the next step, hired a trainer and nutritionist -not the same people I work with now- and started training for my first show.

Q: You knew it would be discipline, but did anything about the prep surprise you?
A: You think you are a healthy eater before you start doing this. I thought I really ate healthy and knew a lot and then you start eating clean and it broadened my horizons. The biggest part was eating six times a day. My nutritionist game me my meal plan and I didn't understand how I would cook all this chicken and eat six times a day. The hardest part was adjusting to the diet in the beginning and getting rid of anything bad I was eating. 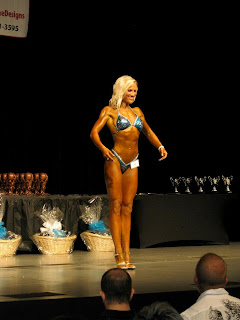 Q:A lot of people I interview say that after the first show competing becomes almost addicting, was that the case for you?
A: I definitely think that right after the show you get that feeling you wanna compete again. I wouldn't say I am addicted. I enjoy it but I don't feel I have to do four or five shows a year. I enjoy the lifestyle of eating clean and working out and doing a show once or twice a year. I am still getting into it, so maybe that will come.

Q: Did any friends or family react negative to the adding muscle and competing?
A: Not really. I have always been so active and in the gym and worked out. It wasn't a surprise to anyone that I was doing it. I didn't have any negative feedback at all.

Q: One thing I notice from pictures is you are in great condition on stage, is that something you take pride in?
A: Yeah! I have good genetics to start with and lean down very quickly. Being a dancer my whole life I had a one-up, I had good glutes to begin with from all the leaps and stuff. It has been easier for me than some other people. I have a quick metabolism and put on muscle quickly.

Q: Does the dance background give you an advantage that you are used to being on stage as compared to others?
A: Absolutely! I don't get nervous where some have terrible stage fright. I actually feel better when I am on stage, I do better in front of people. I looked forward to it cause after I stopped dancing, that was my last time performing so it was nice to get going again and get on stage in front of people. I thrive on that.

Q: When are you competing next?
A: I compete in nine days. The natural Southern States Classic.

Q: From last time, where did you try to improve?
A: My shoulders needed a lot of work and still do. They have come a long way in nine months. I added a second shoulder day. I am eating a lot more, the diet helped ten-fold with how much mass I put on the last nine months. My legs to, but definitely my shoulders. 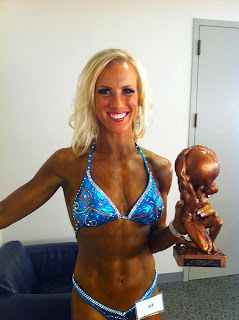 Q: For those who may not be familiar, why are those big shoulder caps important for figure?
A: I think it rounds you out. I don't feel they are any more important than anything else. You can have great delts but if you have crappy everything else, what purpose does that serve. But it looks good when you have the nice cap on your shoulder, it balances your lower body a little bit.

Q: You have been working with Alex Ellis who to me has become one of the best coaches in the sport, how much has she helped you?
A: A lot! I had a different coach and started with Alex in September. She did my posing my last show so I had already been working with her, then in September she got a hold of my diet and gave me a great off-season diet. I have eaten so much more, I cant describe how great it has been. Before I was always hungry and now food isn't an issue, I am never hungry. I think the nutrition has helped a lot. In the beginning she did a lot with my workouts but being that I am a trainer I have a good background. We work out and I have learned exercises from her. The nutrition and pushing me harder on cardio towards the end to.

Q: Does the success that several of her competitors have had recently help motivate you?
A: Absolutely! It is nice to know she has a good track record. It makes you think you will do just as well if you put in the same work as the other girls. It is motivating to know that the girls she coaches are getting pro cards and hopefully that goes well for me next week.

Q: Everyone wants a pro card, but is it like a serious goal for you or are you happy doing what you are doing regardless?
A: I really want to get it. Like you said, everybody wants it. I feel like I have put in the work and changed my body so drastically and feel I deserve it. That being said, some other beast can show up with more muscle and that wont take away from what I have done. I definitely want it, but it is not the end of the world if I don't. 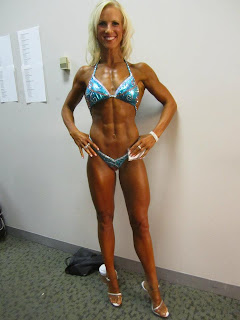 Q: When you are in the gym do you get the stares or attention from people?
A: Absolutely! More so now when you are in the cutting phase. People are like "wow, your muscles got bigger" and I'm like "No, I just don't have as much fat on them right now."A couple weeks ago I was in Houston in a couple random gyms and three different people came up to me and said "wow, you have great arms, what did you do." I have gotten more stares since I am leaned down. Not necessarily negative, I think people are interested in what I am doing and training for. If anything I have gotten more clients because of it.

Q: If you could spend a day training with someone you never trained with, who would it be?
A: It's probably cliche but I would say Erin Stern. She has a beautiful body and she is very humble and down to earth. I think she is a great person. 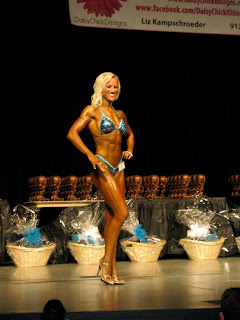 Q: Anyone you want to thank?
A: Of course Alex for everything she has given to me, the encouragement and nutrition plan. Kristin Flannery, my workout partner, she inspires me daily because of having kids and a job and still manages to get everything done. She is my constant cheerleader. Ashley Lewis has been a really great motivator, we have done this prep together and motivate each other since the fall. All the girls from Team TCP for their daily support and encouragement. My boyfriend for always supporting and listening to me and handling the last few weeks of prep.
Posted by JasonDBK at 8:47 PM