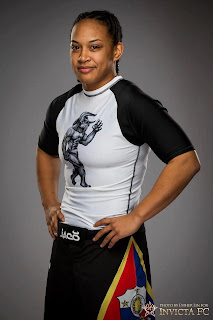 
After having a hard time getting fights, Tamikka Brents is finally getting regular fights and in doing so, is showing why no one wanted to fight her. Still yet to suffer a lose, Tamikka is coming off a decision win at Invicta over Amanda Bell. On April 20th she fights for Freedom Fight Series when she takes on Holly Bartley.

Q: Last fight was for Invicta, you won a decision over Amanda Bell, how satisfied were you with your performance?
A: I saw things I could have worked on of course because I am nit picky. At the same time, I thought it was a quality opponent. I was pretty happy and it was pretty cool having "Big" John raise my hand.

Q: Does it give you confidence knowing you can do the three pro rounds?
A: Yeah, I think it does. Fighting for Invicta was the most nervous I have ever been. My coach said he didn't see it and I was like "that's cause I am good at hiding it. It gives me confidence I can do all three and I will still win but I would rather end it in the first.

Q: You did catch her with some good shots, were you surprised she didn't go away?
A: No, she was resilient. She was number one or two at 145 as an amateur. I knew she wasn't a chump. We grappled the first two rounds. I think it would have been different if I had landed those shots in the beginning as opposed to the end of the fight. But a win is a win. 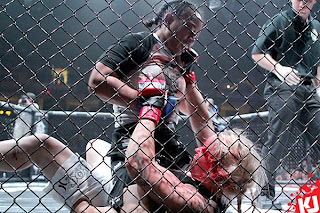 Q: Until recently you have been getting ducked a lot, are you happy to be getting regular fights?
A: Definitely! I figured turning pro would cut down on people backing out. The Randi Miller fight was an exception and thankful after that one it hasn't been a problem finding anyone. It has been kind of a struggle sometimes if it is not for a major organization, but other than that it has been pretty good.

Q: You have Holly Bartley coming up, how has the camp been?
A: Great! After Invicta we went up to Jorge Gurgel's camp and trained with all the guys there because all the girls were in California for their own camps. We trained a week there and came back here and worked everything. Training hard, I feel good, no injuries, I am happy.

Q: She is replacing your original opponent, do you give her some credit for stepping in and making her pro debut against a top ten fighter?
A: Definitely! I was excited to fight Breea Gilbert because I know she has that really good grappling base. When I found out she got hurt I was afraid I wasn't gonna have a fight. Holly stepped up and she is not afraid, it should be a good one?

Q: Do you know anything about her?
A: No! Her name is Holly, she is a girl and we are fighting on Saturday. 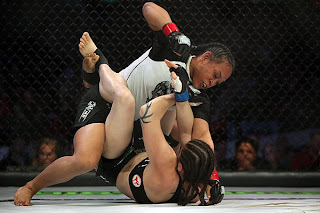 Q: Does it add pressure to win impressive since it is gonna be your crowd?
A: Yeah, I think there is added pressure. There is always pressure, but when you are at home it is a win/lose situation. You are at home so you don't have to travel and you are comfortable but then you don't wanna lose in front of your hometown. Then you have the haters from your hometown that come to see you hoping you lose. I like it. I get more nervous to fight at home but I think I perform better at home to.

Q: Do you have a prediction?
A: I got some new tricks people haven't seen, I might bust out some new stuff. I've been training with the Power Rangers and Ninja Turtles a lot lately. They have taught me things but I cant use nunchucks cause that is frowned upon in the cage. I got some new tricks that people will be pleased to see. 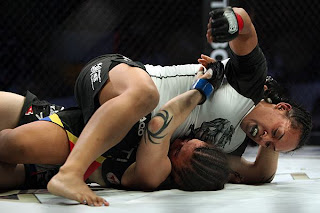 Q: If you were on The Ultimate Fighter, Ronda or Cat's team?
A: Well, I know you probably didn't think I would say this, but I would wanna be on Rousey's team. Mostly because I am holding a grudge because Cat was Randi Miller's coach and I blame everybody involved in that.

Q: Best Will Farrell movie?
A: I like Talladega Nights and Step Brothers, but I liked Night at the Roxbury to.

Q: Item of clothing that when you see girls wearing it, you want to head kick them?
A: I hate when girls wear tank-tops and scarfs. I don't understand why your shoulders are hot and your neck is cold.

Q: If they were to remake a movie with you as the star, what role would you wanna play?
A: I would wanna play a villain that gets away.

Q: Rocky vs Rambo, who wins?
A: Rambo has all the firepower. Rocky has heart but bullets can stop your heart very easily so I am gonna go with Rambo.

Q: Stupidest movie ever?
A: I have seen a lot of stupid movies. A Robert Pattinson, Cosmopolis. It was awful.

Q: Have you seen Napoleon Dynamite?
A: Yes! 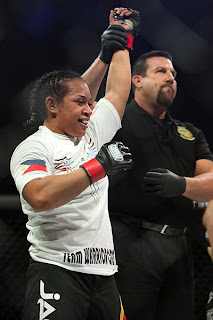 Q: Then would you vote for Pedro?
A: Yes, I would definitely vote for him. He has this Mexican gang behind him.

Q: Anyone you want to thank?
A: My friends and family, my gym Team Warrior Concepts, my head coach and the owners of TWC, Scot and Jenn Ward, also known as my seconds parents, the Ladies in our women's fitness class, they are always cheering me on and pushing me to go harder. I'd also like to thank my teammates who help push me, Morgan "Lil Boom Boom" Becker, Frank Sloan, Trevor Ward, Brea Elston. All my coaches, head coach Scot Ward, my BJJ coaches Jake Bell and Lex James, my wrestling coach Curt Bee, my Muay-Thai coach Jared Rusk and my strength and Conditioning coach Ryan Molohan. A special thanks to Jorge Gurgel and his team for the amazing week myself and some teammates spent there learning so much from world class fighters and coaches. A huge thanks to my awesome F's, Scoops and Kel for being there for me and helping me through this crazy fighter life along with my A-Team and the Oreo who are always supportive no matter where they are. My amazing sponsors, Complete Nutrition, AMB Construction, Spartan Sports Park, Keppler Environmental Management, Jansen Concrete, Marc Passoni of Green Hyundai, New Age Tattoos, my awesome chiropractor Clint Scott, my amazing massage therapist Renee "Magic Hands" Dean, The Body Quest Store, Alien Ape, Bar Oasis, Corrective Exercise SP, Defense Soap, Intimidation Clothing, Scandals Nightclub, Fastest TKO, Lids, Title Shot Apparel, Punch Tow, Janet Boyer of Body by Vi, Stevenson Drive Pawn, Maids R Us Inc., Jason Craig of the Perrysburg Heights Community Association, Unique Blendz, Just Beds, Brown Excavating and the Gyro Stop. They are awesome and support me as much as possible, Also a big thank you to Freedom Fight Series for the opportunity to fight at home again. Thank you to Jason "Sweet Cheeks" Adams for being and awesome person and interviewer.
Posted by JasonDBK at 12:58 PM