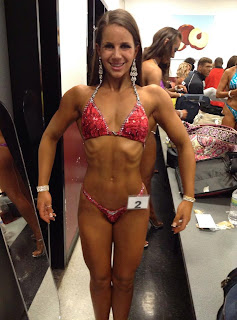 After initially joining the gym to get bigger so she could join the wrestling team, Maura Gay, Maura stuck with it and late last year stepped on stage to compete in bikini. Recently she made the switch to figure for the John Kemper Classic and took second place. Maura seems a natural with a great stage presence. With some time and improvements she can do some big things in the sport.

Q: Can you talk about how you got started in the gym?
A: When I was in middle school I wanted to wrestle. They wouldn't let me, they being the athletic director, because I wasn't as big or as strong as the boys. I decided to start lifting three days a week before school. It kind of snowballed from there. I finally got to wrestler my freshman year of college and that is when I really started to lift. A couple injuries and a change of sport later, and here I am.

Q: Why did you want to wrestle?
A: At that school, sports were required because they don't have gym classes. I didn't wanna play basketball and that was my only other option.

Q: What made you decide to compete?
A: I transferred to a new college. The first day I was here was the day I met my current boyfriend who was prepping for a men's physique competition. I looked into everything and decided it was something I wanted to do. I started in bikini in November and then decided to switch to figure and competed in that last weekend.

Q: That first show, were you nervous?
A: I was o.k. up until the last three days and then I was a mess. As soon as I stepped on stage the nerves were gone. 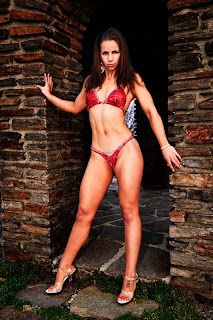 Q: A lot of people I interview say that they do the first show and it becomes addicting, was that the case with you?
A: Definitely!

W: What about it did you enjoy?
A: I love competition, I live for competition. I have been a life long competitive athlete, a competitive equestrian from age three till last year. That was the change of sport I mentioned. To be able to lift heavy and eat right and really feel good and compete on top of that, it is the perfect sport for me.

Q: For figure, did you make any drastic training or diet changes?
A: Not really. I had been putting on a lot of good size and even since that competition I have put on good size. I haven't been doing this that long so I think that just progressing through and getting bigger is the way that it is going. I intend to not do anything drastic, I don't feel the need to go to extremes for anything.

Q: You just took second at the John Kemper Classic, how satisfied were you with what you brought to the stage?
A: I am really happy with what I brought. I know what I need to work on and I have eleven weeks to do that before Team Universe. I am really happy with the size I put on and throughout the diet and prep I was able to keep that size, I didn't lose anything. 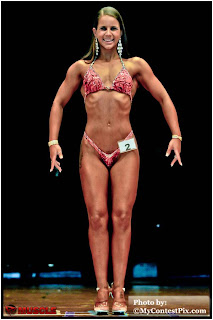 Q: I was impressed with how confident you looked being so new, were you that confident?
A: Yeah, I felt really good. It wasn't like that the whole prep, there were days when it is like "I look like crap today." That last week everything came together. I peaked differently for this show than the last show and that really made a big difference. I woke up that morning and it was "game on."

Q: Your posing was also good for someone so new, how much posing practice did you do?
A: We have an aerobics room with full length mirrors at the rec center at school. I try and spend ten or fifteen minutes in there after a workout. I try and do it three or four days a week. I practice in my apartment to and take pictures and tweak things.

Q: Did you have any idea how hard the posing would be?
A: I have a bad lower back and I knew it would bother my back. The amount of work to put into it, I didn't expect although I should have given I am a perfectionist. Now that I have figured out what looks best, it is easier to play within that little range rather than "do I wanna keep my legs straight or bend?" That was the hardest part.

Q: Did you look at pictures of other competitors to get help?
A: Yeah, I looked at everything from the pros down to the local competitions. See what the judges are looking for and liking.

Q: For Team Universe, compared to this last one, where do you need to be better?
A: I need to pack on some size in my legs. That has been my weakest point throughout this whole thing. I have made some changes to my split in my program so we will see how that plays out. 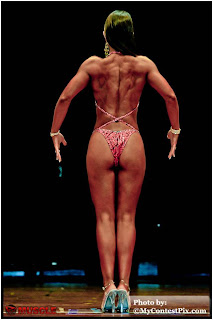 Q: You are still young, do you feel ever like you are missing out on things people your age are doing?
A: Not really because the things my age are doing are not things I ever took part in. This weekend at my college is something called Block party. I knew about it coming here, but it isn't my thing. I would rather get up in the morning and do some conditioning.

Q: When you are in the gym do you get the stares or attention from people?
A: I do! I tend to be at the gym at the same time so that crowd is used to me. If I go a different time, I do get looked at a little bit.

Q: Is it hard to block out?
A: As long as they aren't saying anything, it is easy to ignore. If comments are made, it gets annoying but not enough to deter me from my workout. I am in there to do a job. Being a student I have limited time to get that job done.

Q: If you could spend a day training with someone you have never trained with, who would it be?
A: I would love to train with Dana Linn Bailey. It is because of the amount of intensity she brings to a workout. 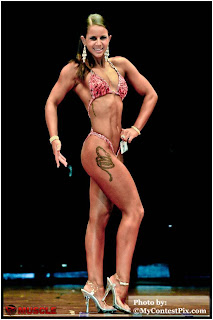 Q: Anyone you want to thank?
A: My boyfriend, he has been a rock behind this whole thing. I wouldn't be where I am without him.
Posted by JasonDBK at 3:50 PM