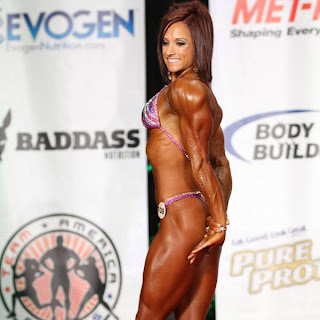 
After starting out in figure -including winning the overall at her first show- Melissa Lesage made a successful transition to physique -in part so she could continue to do what she likes and lift heavy- taking second place and the NPC Grand Prix. She will be taking a long off-season to build for the USA's in 2014. With so much time for improvements, Melissa can be a real threat to end 2014 with a pro card.

Q: Can you talk about how you got started in the gym?
A: I started going to the gym back in 2008. Basically just doing your typical gym goer thing. I did cardio, a little bit of weight training here and there and then just head home. Eventually I was convinced by all the trainers at the gym to hire I trainer. I hired a trainer and had gym trainers off and on for about two years. In 2010 I came across a trainer who was a competitive triathlete and he convinced me to give a triathlon a try. I competed in that in August 2010. It was fun but I spent a lot of time just doing tons of cardio and being pulled out of the weight room because I had to much muscle. I took first in my age group but I knew it wasn't where my heart was. I enjoyed weight training. Shortly after I started to get back to the weights. I was still running quite a bit but I would run and then weight train.

Q: What made you decide to try competing?
A: I met a couple of girls at Gold's Gym here in Tucson. They approached and asked if I competed. I said "no, I don't even know what that means." I came home and did some research and decided "what the heck, I spend enough time in the gym and I love weight training so why not give it a try?" I hired a coach here in town and did my first show in March 2012 in Phoenix. I competed in figure, I was nervous as can be and took first in my class and the overall and was hooked.

Q: What about it caused you to get hooked?
A: I have an addictive personality. Once I find something I like to do, I just do it and it becomes part of me like getting up and brushing my teeth, I get up and go to the gym, it's just something I do. 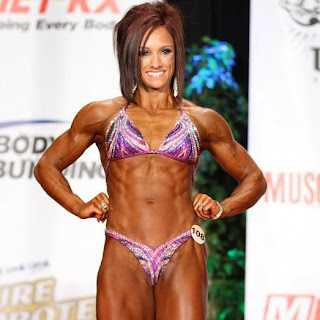 Q: What made you decide to switch to physique?
A: I like to lift heavy and hard. With figure, I had restrictions. My coach at that time kept telling me "you need to keep the weight down, you cant be getting too muscular, figure is more feminine." I wasn't comfortable in figure because I am not into wearing heels, not into being a girly girl, I am not like a little Miss Priss. I decided physique was for me, I can go flat footed, lift as heavy as I want, get as lean as I want, it's a better route for me.

Q: When you decided to make the switch, did you make any drastic training or diet changes?
A: Not real drastic. I actually went into physique thinking my food would be more and my cardio less, but it is the opposite. I went no carb from fourteen weeks out, that was hard at first, but I got acclimated and actually felt better. My cardio nearly doubled from figure, but I come from a triathlon background, so running ten miles a day and biking ans swimming helped with what I currently spend on the stairmill each day.

Q: Were you any more nervous doing a routine as opposed to quarter-turns?
A: I was at first. I had a hard time picking a song. I asked people for advice and got mixed things from everyone. So I picked a song and started dancing around in the living room and put some poses together and it flowed smoothly. When I got on stage I wasn't nervous at all compared to figure. I was so afraid of walking in heels and falling. Going out there flat-footed and doing my thing is much more relaxing. 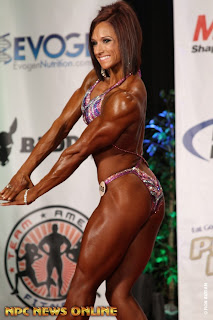 Q: You just took second at the NPC Grand Prix, how satisfied were you with what you brought to the stage?
A: I was very pleased. This is the leanest I have ever been. My coach Shelby Starnes, it was my first competition prep with him and I couldn't be happier. Everything went as planned, I wasn't starving the entire time like I have in the past, he listened and helped me through the whole process. Overall, I had a really good experience and was very happy with what I brought to the stage.

Q: Do you know when you want to compete next?
A: We are planning on USA's in Vegas in 2014. So a fifteen month off-season to put on some size and train hard, condition better and bring an even better package. 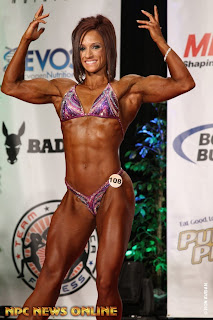 Q: When you are in the gym, do you get the stares or attention from people?
A: Oh yeah! I get a lot of people who come up and ask me "what do you eat, how do you make yourself look like that." People have literally asked if I take some pill to look like this. I'm like "no, I train my butt off, I am here every morning and every afternoon, I follow a strict diet". I do get weird creepy stares in the morning on the stairmill or crazy looks when I am lifting.

Q: Is it hard to block out and not get upset?
A: Sometimes it irritates when people wanna talk or interrupt my set. For example, I was using the lat pulldown a couple weeks ago. Someone came up as I am pulling down the bar and smacks me on the back and says "hey, what's up." I'm like "really, in the middle of my set?"

Q: If you could spend a day training with someone you have never trained with, who would it be?
A: Dana Linn Bailey. Dana was one of the reasons I got into physique. I have been following her a long time and totally inspired by her physique. I would wanna hit delts and chest with her. 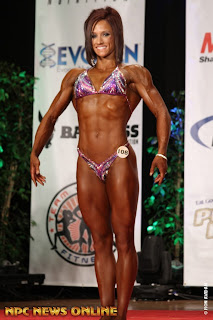 Q: Anyone you want to thank?
A: My coach Shelby Starnes for helping me get through the diet and cardio part of this. I am also a part of Mountain Dog Training by John Meadows, so I wanna thank John for getting me my workouts and kicking my butt in the gym. Of course my boyfriend for supporting me and putting up with me through the dieting process. I have put him through hell but we come out stronger each time.
Posted by JasonDBK at 6:26 PM