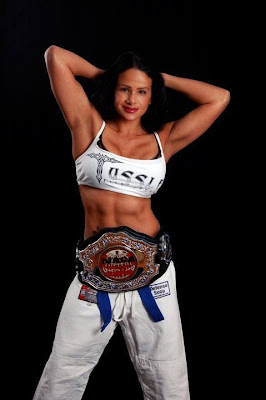 Early on when I started doing these interviews I was introduced to a fighter named Tisha Rodrigues. I was told she was a former fitness competitor who is now a promising fighter. I did that interview and since then Tisha is someone who has become a friend who will always have my support. Tisha is preparing for her final amateur fight before turning Pro. If you know Tisha at all, you will know there is no question Tisha will make a great Pro fighter and will make a huge mark in the sport. To know Tisha Rodrigues is to love and be a fan of Tisha Rodrgues. 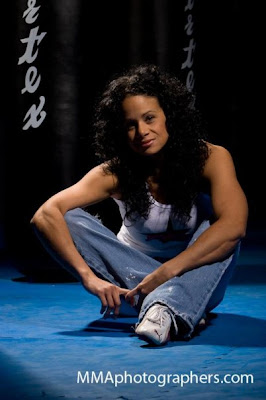 Q: First Tisha, thanks for taking time to do another interview.
A: My pleasure.

Q: For those who may not be familiar can you tell a little about yourself.
A: I'm an MMA fighter, ammy, I have been in the sport for about 3 and a half years. I feel like I have finally found what I'm supposed to be doing. I'm a mother to three kick ass kids, they truly are one of a kind and I can't complain, they are great!! I'm married to my number one friend, lover, supporter and trainer. I work as an MMA jornalist and writer, personal trainer, marketing director and correspondent for The Next Great Fighter.

Q: Our first Interview was quite some time ago. Whats been going on in your life since then?
A: Oh wow, a ton! I have a new sponsor, who's fantastic, I also work to help promote them, Defense Soap. I recently won the title belt in Expert Div at Naga. I had an interview on me by the awesome Doug Jeffrey for Ultimate MMA Magazine, which was a huge honor as an amateur fighter. I'm going to appear in Fight Magazine after the Holidays as the new ad/face of Defense Soap and I have decided to take the next step in my career and turn Pro.

Q: I know you have a fight scheduled. When is it, where is it, and who is it against?
A: It's on Feb 19th, opponent unknown, in Mansfield, Ma for Full Force Productions.

Q: You used to compete in fitness. Has there ever been a thought of going back to that?
A: Never ever..( bahaha), the diet was just too much, other than that, I had a blast performing my fitness routine! I accomplished what I wanted in Fitness and Figure and I wouldn't have room for it in my life now. I still train women who are interested in competing! 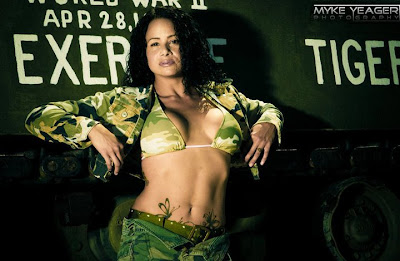 Q: You said the plan was to turn Pro after this fight. Is that the definite plan or does it depend on how this fight goes?
A: It's the MAD plan for def...I'm going to win my last ammy fight and take that leap!

Q: Where have you been training at these days?
A: I train at my second home Team Boneyard in Taunton,Ma, but I also enjoy training at Bert Neves Boxing gym ( my uncle ) and over at Tim Burrills.

Q: Since your last fight, is there one aspect you feel you have improved on the most?A: Well, technically since my second fight. I was lacking in my ground game, so I turned it up a notch...or a few notches and really put my heart and soul into getting better..I'm to the point where I actually want to shoot, take you down and work my ground game...or of course standup. I'm leveling off, but can never stop improving. I'm my toughest critic!

Q: Any idea on how active you would like to be in MMA? For example
> how many fights you would like to have in the next year?
A: I will fight twice per year, I think more than that and you are not giving yourself the chance to actually learn. Work on your weakness, better your strength...always evolve. You even have to learn from your wins. I'm very into the " mental" aspect of the game now and that alone, has made an incredible difference.

Q: Have there been any fighters you have watched lately who have impressed you at all?
A: Lisa Ward and Jessica Aguilar. 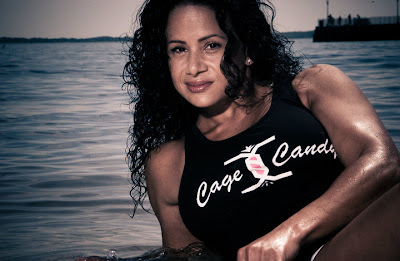 Q: Where did the Lil Bully nickname come from?
A: The guys at my gym, mainly my husband gave it to me, I may be the only girl fighter, but I def bully around the boys....(it's unconsciously) how suiting seeing as I was bullied most my life. Also, because of my aggression, I'm certainly not suave in my way of doing things.

Q: What do you think is the biggest misconception about women fighters?
A: That there are not enough talented women out there.

Q: When you have free time, any hobbies or activities you enjoy?
A: I love dancing, writing, hiking w my family, reading and scrapbooking.

Q: What is your current training schedule like?
A: I train every morning Mon-Fri cardio and weights, I take Spin Class 2x per week. I wrestle at least once per week. I do strength and cond 2x per week on top of morning training. Jiu Jitsu on Monday nights, then Fight Team, Tue nights when in training, strength and cond, Wed nights, Strength and Cond. Thursday nights Muay Thai, then MMA and Fridays Boxing. I try to cross train every other Sat. When I'm training for a fight my schedule changes. 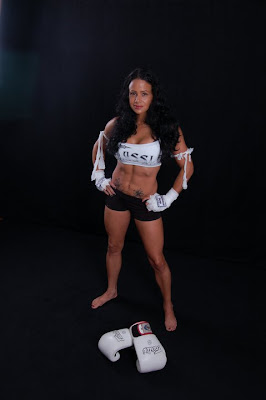 Q: Do you prefer fighting early on a card or later on the card?
A: Not first, not second...3rd or 4th

Q: Finish this sentence. In five years I will be?
A: Fighting Pro with a clean record on Strikeforce, up for Breakthrough Female Fighter Of The Year!

Q: Are you looking for sponsors?
A: Always looking for new, supportive people to work with in the future! 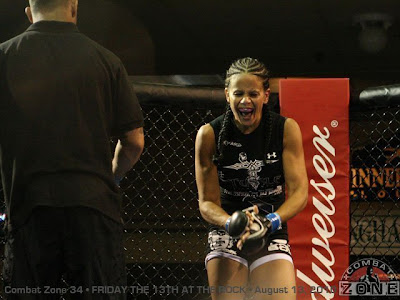 Q: Tisha, thanks again for doing this. You have become a good friend and someone I personally really admire. Any last words before you go?
A: Just a big thank you to you and all you do and to my amazing friends and supporters out there that always pick me up when I need it and believe in me. My husband Mark, my 3 rugrats and my trainers!!
Posted by JasonDBK at 7:01 PM