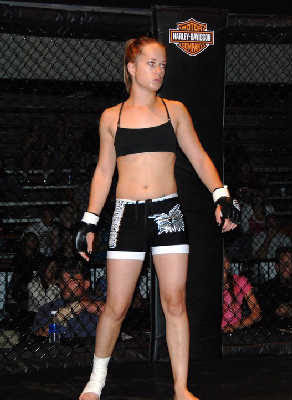 In this interview Shawnee Merrell describes herself as "More than just a fighter". That is obviously a very truthful statement. A full time college student, along with an MMA fighter, I have been very impressed with Shawnee since the first time I talked to her. Balancing both school and training has to be at times exhausting, but she seems to be the type of person who can handle it and be a huge success at it. Shawnee is one of those people I feel I am sort of introducing to a lot of fans and when she is a star in this sport I can look back and say "I told ya so".


Q: First, Shawnee I want to thank you for taking the time to do this.
A: Not a problem. Thank you for allowing me to do an interview

Q: Can you start out by telling a little about yourself.
A: Sure, I’m 20ys old I was born in Payson Ut. I was 2 years old when I moved to Wyoming. I enjoy spending time with family, friends, and team mates. I also like coaching swimming and being outdoors. I’m the fourth child of five. I’m actually the middle between two boys to whom I am the closest with. Growing up with brothers was definitely a different experience. As much as I hate to say it being such a tom boy is what got me into fighting, Nick Mamalis got a hold of me to fight because I had a few street fights and he knew about it. But the one that really kept me going in such a great sport is my boyfriend and team captain Ty Hamblin. If it wasn’t for him I wouldn’t be the fighter I am today.

Q: Were you especially athletic growing up? Play any sports?
A: Most definitely, I swam competitively for about six years and in the off season I played basketball and ran track as well. So it was normal for me to be in a sport at some point In time

Q: What initially got you started training for MMA?
A: Well actually I had two local fights in my hometown while I was in high school still, and after I graduated I moved away for the summer and when I came back I got a call to fight that next month and I said yes, well then my now coach and boyfriend called me to come train at his gym and it all started with him and my family at team outcast.

Q: How long did you train before your first fight?
A: Ha, that’s a funny one. I actually had four days to train before my first fight. Nick Mamalis actually caught me four days before the show while I was at work to ask me to come fight for the show.

Q: Was fighting something your family and friends supported?
A: At first no, My dad threatened after my first loss and fight to take me off the health insurance if I kept doing it. Then I pulled the dad, the boys got to do extreme sports card and he finally caved. My friends on the other hand thought it was the most amazing thing ever. My second fight I had happened to be against Jennifer berg the night before I graduated high school and friends as well as teachers came out to watch that one. It was an amazing experience

Q: Where do you train at now?
A: I train at Outcast gym in Rock Springs Wy under Teno Trujillo and Ty Hamblin. For the first year I Trained there I was the only female. Now we have one other one, my team mate and ex opponent Kiele Lewis. I also train at another facility called Wyocombatives, it’s also in Rock Springs WY 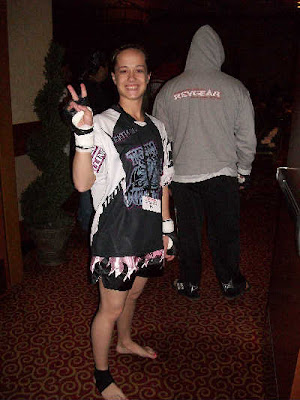 Q: Can you give your overall record so far.
A: Unofficially my record is 2-3 two of the fights weren’t registered.

Q: Which fight so far is the one you are most proud of?
A: My proudest fight by far has to be the night my whole family came out to watch me fight a girl and I ended up winning 22 seconds in the first round via Rear naked choke. I was so happy that my family was able to be there for that.

Q: What is the best and worst part of training and competing in the sport?
A: I would have to say sparring boys twice my size, one of whom happens to be my boyfriend. Oh, and cardio.

Q: Are there any fighters you are a fan of or love to watch?
A: Julie Budd. I love watching her fights.

Q: In your opinion, who are the top five female fighters in the sport pound for pound?
A: Cyborg although Julie Budd is also a stud fighter, and Fujii. After that I’m staying out of it

Q: Do you ever see a major U.S. women's only company being viable?
A: Possibly, I noticed as of lately there has been a handful of female only fight cards. I think it just depends.

Q: Often you watch a show that has one women's fight. Somehow that fight always turns out to be the most exciting fight on the card. Why do you think that is?
A: Because female fighters are amazing!!

Q: What is the biggest misconception about female fighters?
A: That we’re not that tough. And we don’t put on good shows.

Q: If another woman told you she wanted to train for the sport, whats the biggest piece of advice you would give her?
A: Are you sure you want to get hit in the face that hard as well as repeatedly 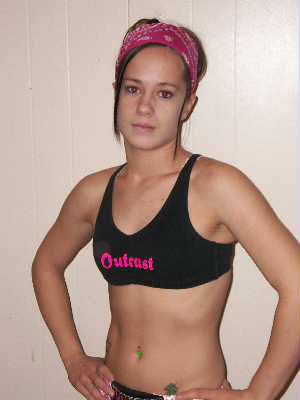 Q: Outside of training and fighting, any other hobbies or activities you enjoy?
Actually I’m a fulltime college student, so that takes up a lot of time. I also really enjoy spending time with my family as well as swimming. I still have a love for that sport.

Q: Can you describe a typical day in the life of Shawnee Merrell
A: A typical day would be school, cardio, homework, training, work, and usually after work it’s either more cardio or regular practice.

Q: What is one thing people would be surprised to know about you?
A: I despise working on my cardio.


Q: So whats next for you? Any idea when you will be fighting again?
A: I actually have a title fight in Ben Oregon, Jan 8 against Liz McCarthy. But nothing for sure until then.

Q: Anything you want to take this time to plug or promote?
A: I want to give huge thanks to Outcast. You boys have done so much for me. Thank you Teno for everything you’ve done for me. And To Ty Thank you so much for not hitting me in the throat when I know you’ve wanted too. Also big thanks to WyoCombatives and Mike Nauman for all of your help and patience. And finally a huge thank you to my family for supporting me in everything I do. If it wasn’t for you I wouldn’t be the person I am today.

Q: Are you looking for sponsors? If so, how can they reach you and what are they getting in Shawnee Merrell the fighter and person?
A: Of Course, they can reach me at my e-mail at hotstriker10@gmail.com. And as a fighter and a person, I will give them my all.

Q: Shawnee again, I want to thank you for doing this. Any last words before you go?
A: No problem, and I would just like to thank my family again, without you guys I wouldn’t be who I am. And I would also like to thank my sponsor S&W Welding. And you. Thank you for taking your time to give me this interview.
Posted by JasonDBK at 2:16 PM