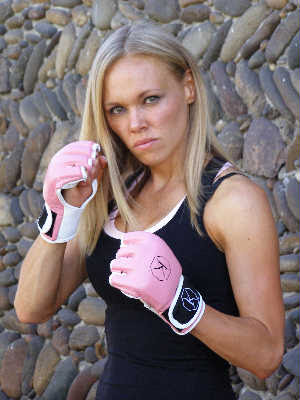 Want to know why I support and promote women in MMA? Look no further then Glena Avila. She is a perfect example of why I do. She has a love for the sport, and a love for being a good positive role model. Her hard work, dedication and passion are admirable. I have wanted an interview with Glena and thought I had asked her, only to find out I never did ask. SO when i finally got the opportunity I was very excited. When you read this, you will see why I was so excited. 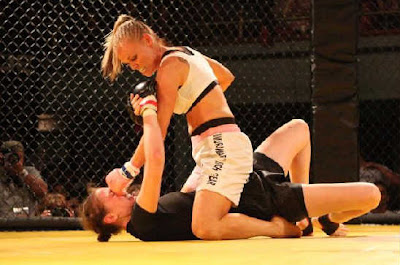 Q: First, Glena I want to thank you for taking the time to do this.
A: Actually, I should be thanking you! It's important to me to get a positive message out there about women in MMA. I appreciate people like you giving me the opportunity to address the common misconceptions and allowing me to express myself about what the sport means to me.

Q: Can you start out by telling a little about yourself.
A: I'm a 35yr old mom from a very small town in Oregon. I've been fighting for a little over a year now. My current amateur record is 4-0. I'm training for another fight that will take place on January 8th. I hoping to go pro with-in the next year.

Q: Were you especially athletic growing up? Play any sports?
A: I wasn't particularly athletic. My family couldn't afford for me to participate in most sports. I did excel at dancing and won dance competitions regularly. I had even considered dance as a potential career choice.

Q: What initially got you started training for MMA?
A: I've always been a fan of Mixed Martial Arts. My boyfriend had taken on a couple fights. He did well and I was very excited for him. At some point I caught a youtube video of a female MMA match. I contacted the promoter to see how I could try it and the rest is history! 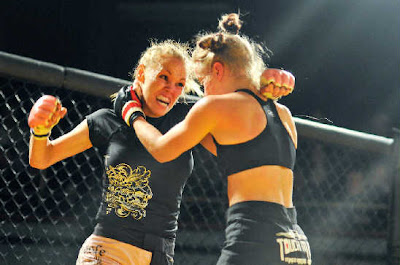 Q: Was the training something you picked up fairly easy?
A: Some parts of it, other aspects took me a long time to grasp. Even though I feel like I've come a long way, I'm still a work in progress.

Q: How long did you train before your first fight?
A: I didn't have any formal training before my first fight. I worked with some local wrestlers a little to get an idea of what to expect. Even though they did a lot to help me out, I realize now how ignorant I was. I wouldn't recommend going about it that way to anyone. I won that fight but it could have easily gone the other way and I could have been hurt badly. Mixed Martial Arts is no joke and everyone should have proper training before trying it.

Q: Was fighting something your family and friends supported?
A: I would say there is about a 50/50 split. It's still a constant struggle to break past the misconceptions about the sport but I also have a lot of fans and supporters.

Q: Where do you train at now?
A: I train out of Rise Above MMA in Portland, OR with Ron Andersen as my head coach.

Q: Can you give your overall record so far?
A: So far my amateur record is 4-0. I'm hoping to get another win in January.

Q: Which fight so far is the one you are most proud of?
A: That's a tough question! I'm really proud of all of my fights! Every opponent that I've had so far was an incredibly tough competitor. My fight with Janna Piper was the first female title fight for The FCFF and my fight with Tia Spurlock was the first female main event for the FCFF. I felt like those were huge accomplishments, but if I had to pick one fight to be MOST proud of, I would have to say it was the title defense against Maygen Sato. She came in the cage with guns blazing and ready to take me out. I took a beating for two solid rounds but was able to make a comeback in round three. I took her down and got a TKO. It was a really rough fight for me but I proved to myself and others that I'm never to be counted out. 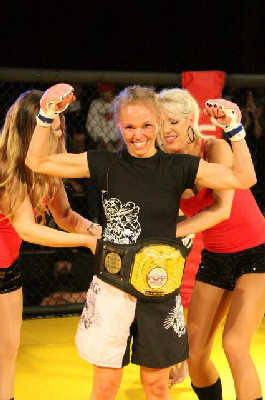 Q: What would you say is your biggest strength and the one thing you most want to improve?
A: I would say my work ethic is my biggest strength. If there is a way for me to be in the gym training, then that's where I'm at. I most need to improve on my lack of self-confidence. I still get overwhelmed at times with where I'm at and the level of competition I'm faced with. My coach, teammates, and fans do a great job helping me overcome that.

Q: What is the best and worst part of training and competing in the sport?
A: The best thing for me is the opportunity to be a role model for my daughter. I like the fact that she is proud of my accomplishments and she is seeing first hand that with hard work anything is possible. The worst part of course would be the injuries.

Q: Are there any fighters you are a fan of or love to watch?
A: I am a fan of fighting, period. There are just too many fighters for me to list!

Q: In your opinion, who are the top five female fighters in the sport pound for pound?
A: Ok, in no particular order, because they all rock in my book; Mega Megumi Fujii, Cris Cyborg Santos, Marloes Coenen, Meisha "Take Down" Tate, Lisa Ward-Ellis. 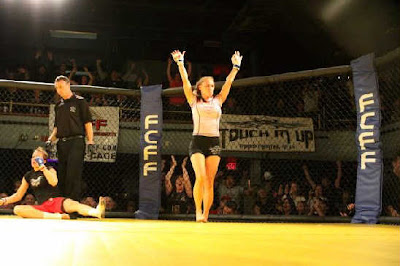 Q: Do you ever see a major U.S. women's only company being viable?
A: Sure! Anything is possible. Personally I would be happy to see women in MMA get as much attention and respect as the men do.

Q: Often you watch a show that has one women's fight. Somehow that fight always turns out to be the most exciting fight on the card. Why do you think that is?
A: I think right now women in this sport are on a mission to prove themselves and prove that we belong here. It makes each fight so much more intense.

Q: If another woman told you she wanted to train for the sport, what's the biggest piece of advice you would give her?
A: The biggest piece of advice I would give her is to find a great coach/team that she can trust. There are way to many people involved in this sport that are willing to throw you out to the wolves for their own benefit. Find someone to look out for your best interest and train hard. 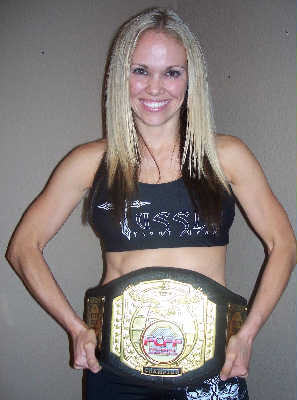 Q: Outside of training and fighting, any other hobbies or activities you enjoy?
A: Mostly I love hanging out with my kids. We are very close and we like to stay home and goof off. I also enjoy dancing. That's something I wish I had time to do more often.

Q: You have new website up. Can you give the address and tell people what they can find there?
A: Sure, there are two websites actually. There is a fan-owned, fan club page, http://www.heartlessmma.com/ On that site you can meet and chat with other Heartless fans and find out about my upcoming appearances and events. But my official website is http://glenaavila.com/. It's still under construction so look for changes on that in the near future. On that site you'll see the link to a teaser for the miniseries/documentary currently being filmed. Both websites have links to my sponsors and my contact info.

Q: Can you describe a typical day in the life of Glena Avila?
A: Well, a typical day for me isn't so typical to most. I'm generally up by 5:00am to get my workout in before my daughter, Annie wakes up. After I get that out of the way, I rush through feeding our pets, getting my daughter up and ready for school, and myself ready for work. I work a regular 7.5 hour day at a Veterans' facility doing admission paperwork. After work, I pick up Annie from school, get Annie something to eat, pack up my gym bag and Annie's funpack of toys and snacks and head out to Rise Above which is about an hour and a half drive. I train for about two and a half to three hours before I turn around to head back home. It's a quick pace from start to finish but it's worth it!

Q: What is one thing people would be surprised to know about you?
A: Usually people are most surprised by my age. I'm 35yrs old and it tends to throw people off a little. They usually assume I'm quite a bit younger.

Q: So what's next for you? Any idea when you will be fighting again?
A: I'll be fighting very dangerous "Mighty" Maylee Seikowitch on Saturday, January 8th at Budo Fights "Resilience" Bend, Oregon. I'm excited about this fight. I feel like it's a great opportunity for me to show how much I've grown and I love the challenge of fighting someone with such an impressive record. (She's currently 5-0)

Q: Anything you want to take this time to plug or promote?
A: Here is a link to project that I'm working on. It's a teaser for documentary following me through my struggles as an upcoming amateur MMA fighter, trying to work my way up to the pros. Anyone wanting to donate to the project should click on the green button that says "BACK THIS PROJECT" Then follow the instructions. I am forever grateful to anyone willing to help me get my story out there.
http://www.kickstarter.com/projects/830183178/fight-dreams-mother-turned-cage-fighter

Q: Are you looking for sponsors? If so, how can they reach you and what are they getting in Glena Avila the fighter and person?
A: Yes, sponsors are great! Potential sponsors can reach me via email, GlenaAvila@hotmail.com or they can reach me on Facebook, http://www.facebook.com/home.php?#!/glena.avila. What Sponsors get from me is a respectful fighter that will handle herself inside and out of the cage with class also I'm a hard worker that is not afraid to put it all on the line. 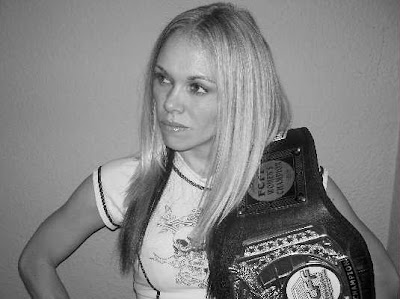 Q: Glena again, I want to thank you for doing this. Any last words before you go?
A: Yes, I'd like to thank you for your time, my sponsors; Tussle Fight Gear & Ranger Up. I would also like to give a shout out to my coaches and teammates from Rise Above MMA, Thank you for helping me become the fighter I am today! Last but not least, I'd like to thank my fans and supporters for having faith in me and motivating me to become better for every fight!
Posted by JasonDBK at 2:09 PM