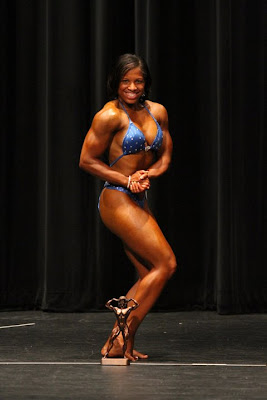 I do not remember how I came across Tiffany Mosley. What I do remember is I saw a beautiful woman who had a great physique. Then I learned she recently started training. Was so impressed with how she looked for being so new. So impressed I did my first interview with her before she even got on stage for the first time. We began talking quite a bit. As I mentioned in the interview you are about to read, we kind of started at the same time, and have encouraged and supported each other. Me having weight to lose first and kind of behind her but in a way I feel we are going through this together. So needless to say when Tiffany just recently did her first bodybuilding competition, I almost felt she was doing it for both of us. Tiffany looked great and seeing pictures I was so proud of her. I will be more than happy if I look half as good as her when I get on stage. She is going to keep improving, keep getting better, and Tiffany is a name I think in the future people will be talking about. And I will brag to the world that I told you first. 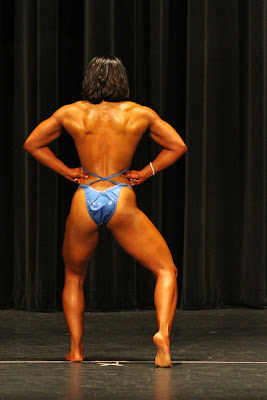 Q: Tiffany, thanks for taking the time out to do a second interview.
A: NO PROBLEM!

Q: For those who may have missed the first interview, can you tell a little about
yourself?
A: I WAS RAISED IN CORBIN KENTUCKY. I'M A 21 YEAR OLD COUNTRY GIRL. I'M STILL IN THE MARINE CORPS. I WAS STATIONED IN NEW YORK DURING MY FIRST INTERVIEW BUT I RECENTLY GOT STATIONED IN NORTH CAROLINA. I MOVED DURING THE MIDDLE OF MY TRAINING WHICH WAS VERY HARD BUT I MANAGED!! :)
IVE ALWAYS BEEN AN ATHLETIC PERSON. I PLAYED BASKETBALL, SOFTBALL AND RAN TRACK IN HIGH SCHOOL AND JUST RAN TRACK IN COLLEGE. AND LAST, I'M PROBABLY THE NICEST PERSON YOU COULD EVER MEET! HAHA!

Q: So I suppose congrats are in order for recently doing your first bodybuilding
competition. In your first interview it seemed Figure was where you were headed. Why the switch?
A: I ATTENDED A FEW SHOWS TO SEE HOW THINGS WERE DONE AND FIGURE JUST SEEMED SO BORING. I LOVED HOW THE BODYBUILDERS GOT TO DO ROUTINES AS WELL. ALONG WITH THAT, I WAS GETTING TOLD I WAS TOO MUSCULAR FOR FIGURE. BASICALLY, IN THE MIDDLE OF TRAINING I DECIDED ONE DAY I WAS GOING TO BODYBUILDING. IT WAS DIFFICULT AT FIRST LEARNING ALL THE POSES AFTER PRACTICING FIGURE POSES THE WHOLE TIME BUT I WAS DETERMINED. 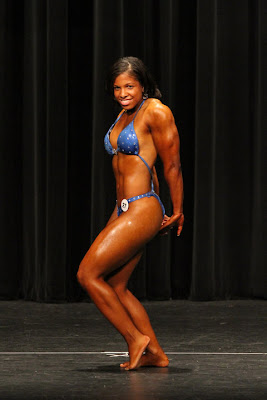 Q: So what was it what you expected it to be like or anything surprise you?
A: IT WAS EASIER THAN EXPECTED. I WAS SCARED TO GET ON STAGE AT FIRST BUT YOU FORGET ALL YOUR FEARS ONCE GETTING OUT THERE. IT'S A GREAT EXPERIENCE. I ALSO COULDN'T EVEN SEE THE AUDIENCE BECAUSE THE LIGHTS WERE SO BRIGHT.

Q: After pre-judging how were you feeling about your chances?
A: I WAS ACTUALLY CONFIDENT. I HAD GREAT COMPETITION AROUND ME BUT I HIT EVERY POSE WELL AND I DIDN'T EVEN MESS UP AND THAT MADE ME MORE CONFIDENT.

Q: How did you feel about the overall package you brought to the stage?
A: I WASN'T PLEASED WITH IT. I COULD HAVE DONE BETTER. I SHOULD HAVE BEEN MORE STRICT ON MY DIET AND DONE CARDIO MORE BUT I DEFINITELY CHANGED A LOT IN JUST 5 MONTHS.

Q: What part of your physique would you say was the one you were most satisfied with?
A: MY BACK OF COURSE 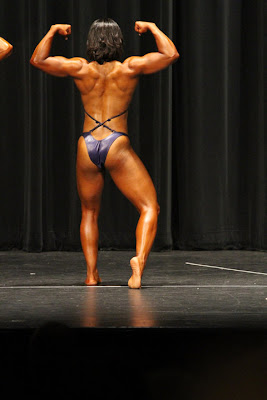 Q: Was there one aspect of your physique you thought could have been better or you want to improve on
A: MY LEGS. I KNOW THAT IS WHAT HINDERED ME FROM PLACING HIGHER.

Q: Did your prep go as smoothly as hoped for?
HECK NO. I DEALT WITH SO MUCH STRESS. BEING A SINGLE MARINE IS HARD BECAUSE YOU CANT DIET HOW YOU WANT. I WASN'T ALLOWED TO COOK IN THE BARRACKS. THEY GIVE US A CHOW HALL AND MONEY COMES OUT OF OUR CHECK TO EAT THERE. THE FOOD ISN'T BODYBUILDER FRIENDLY SO I STAYED BROKE BUYING EXTRA FOOD EVERYWHERE. TRAINING WASN'T TOO BAD. I JUST HAD TO FIND NEW GYMS DURING MY PREP. I ALSO DEALT WITH EXTRA STRESS WITH PERSONAL ISSUES BUT I OVERCAME THEM.

Q: Is there a point in the prep process where you say "O.K. I am ready"
A: HAHA NO I DON'T THINK I COULD EVER BE PLEASED WITH WHERE I'M AT. I ALWAYS SAY I COULD LOOK BETTER.

Q: Anything about the prep process that you can say you want to do different next time.
A: MORE CARDIO..

Q: After a show like that, is it a mental let down at all, now that the process is
over?
A: I'M NOT SURE WHAT YOU MEAN BY LET DOWN BUT I'M HAPPY IF THAT'S WHAT YOU RE ASKING. THAT WAS ONE OF THE GREATEST EXPERIENCES OF MY LIFE. I LOVED IT. AND I ENJOYED REWARDING MYSELF BY EATING WHAT I WANTED PAST COUPLE OF DAYS.

Q: The week before a show like that, what were you thinking about? Nervous or excited, or what?
A: I WAS DEFINITELY EXCITED. I WAS ANXIOUS TO GET ON STAGE. I WASN'T NERVOUS UNTIL THE MEETING THE DAY OF THE SHOW. 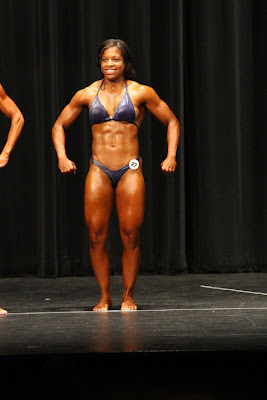 Q: How about those last 5 minutes before you hit the stage, what were you thinking
about?
A: I WAS NERVOUS AND HOPING I WOULDN'T MESS UP. I WAS GOING OVER THE POSES IN MY HEAD AND PRAYING THE WHOLE TIME.

Q; When you were on stage did you try and read the judges reactions at all or just focus on what you are doing?
A: HAHA YES I STARED RIGHT AT THE JUDGES AND SMILED. I WAS TRYING TO SEE IF THEY SAID ANYTHING ABOUT ME AND ALL. I HAD PRACTICED POSING SO MUCH IT WAS LIKE SECOND NATURE WHEN THEY CALLED A POSE.

Q: What's the first thing you ate once it was over?
A: JR BACON CHEESEBURGER AND A FROSTY. (NOT MY FAVORITE FOOD AT ALL BUT I WAS SAVING MY CELEBRATION MEAL FOR SUNDAY)

Q: Were there any other competitors you noticed who really impressed you?
A: THEY ALL DID. THEY ALL BROUGHT SOMETHING GREAT TO THE STAGE.

Q: How important is support from family and friends at a show like this?
A: VERY IMPORTANT! I HAD NOBODY THERE TO WATCH ME. LIKE I STATED EARLIER I WAS STATIONED IN NC RECENTLY AND I DIDN'T KNOW ANYBODY. I HAD WANTED TO DO MY SHOW IN NY BECAUSE I HAD MANY SUPPORTERS THERE BUT STAYING IN NC WAS CHEAPER. IT WAS FRUSTRATING NOT KNOWING ANYBODY AND SEEING TRAINERS HELP THE ATHLETES. I WAS A BIT JEALOUS (HAHA)! BUT I STAYED FOCUSED AND DID MY BEST.

Q: You actually have been training a short time. What made you decide you wanted to
compete?
A: I WAS BORED IN NY ONE DAY AND WENT TO A BODYBUILDING SHOW. I FELL IN LOVE WITH THE SPORT. BEING IN THE MARINES I COULDN'T REALLY BE ON A TRACK TEAM OR ACTUAL BASKETBALL TEAM WHERE I WAS STATIONED SO I DECIDED I WOULD TRY THIS OUT. I'M A COMPETITIVE PERSON AND IT WAS THE PERFECT CALLING FOR ME.

Q: Have you decided when you will be on stage next or is it a wait and see thing?
A: I PLAN TO COMPETE ON MY BIRTHDAY WHICH IS OCTOBER 9TH. I WANT TO WORK ON MY PHYSIQUE MORE SO IT MAY BE LATER. WE WILL JUST SEE.

Q: Anyone you want to thank for helping you in the process?
A: ARTHUR GOODEN. HIS FIRST TIME SEEING ME HE SAID I SHOULD BE A BODYBUILDER. HE DIDN'T KNOW I WAS INTERESTED IN THE SPORT AT THE TIME. HE BELIEVED IN ME AND HAD SAID HE JUST KNEW HE COULD SEE ME ON STAGE ONE DAY. FROM DAY 1 HE GAVE ME ADVICE, TIPS AND HELPED ME IN EVERY WAY POSSIBLE. WHEN I WANTED TO GIVE UP, HE DEFINITELY DIDN'T LET THAT HAPPEN. HE HAS BECOME ONE OF THE GREATEST FRIENDS I HAVE.

Q: Anything you want to take this time to plug or promote.
A: I JUST WANT TO SAY THAT GETTING ON THAT STAGE FOR MY FIRST TIME WAS A LIFE CHANGING EXPERIENCE. I HAVE NEVER FELT SO PROUD OF MYSELF.

Q: Safe to say you have found your passion and will keep going with this?
A: YES, MOST DEFINITELY. I PLAN TO GO PRO AND ONCE I GET OUT OF THE MARINE CORPS I WANT TO START PERSONAL TRAINING AS WELL. 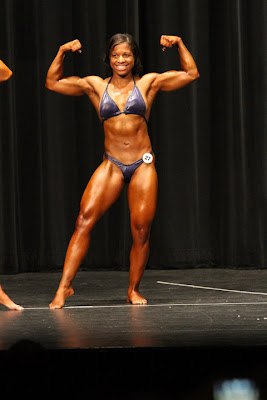 Q: Tiffany I am seriously so proud of you. We almost kind of started at the same time and have encouraged and supported each other. I have all the belief in the world you will keep getting better and the sky is the limit for you. Anything you want to add before you go?
A: I JUST WANT TO THANK YOU FOR TAKING THE TIME TO INTERVIEW ME AGAIN. YES WE HAVE BEEN THRU THIS WHOLE PROCESS TOGETHER FROM THE JUMP AND HAVE HELPED KEEP EACH OTHER STAY STRONG. THANK YOU FOR BELIEVING IN ME AND GIVING ME ADVICE AT TIMES. :)
Posted by JasonDBK at 11:22 PM