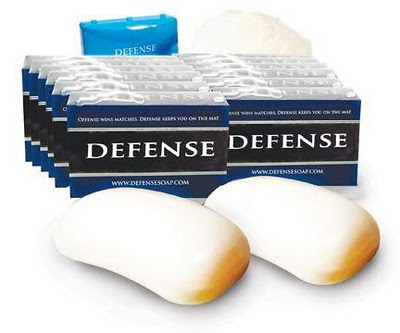 I first became aware of Defense Soap due to them working with my friend Tisha Rodrigues. Anything associated with Tisha will interest me. Guy Sako started it himself after being unable to find the right product for his own team after they were "decimated by ring worm". He has built it into the number one soap product for combat athletes. You have to respect someone who starts something like this on his own and makes it as big as he has and does it for the right reasons. If you are a fighter Defense Soap is something you should invest in.


Q: First I want to thank you for taking the time to do this.
A: Not at all, thank you for the interest in Defense Soap and providing a platform to speak on.

Q: Can you start out by telling a little about yourself?
A: My name is Guy Sako from Cleveland Ohio. I have been involved in amateur wrestling for 34 years. Currently I am the coach of the Westshore Wrestling Club. I have been a Cleveland Policeman for 21 years and the owner of the Defense Soap company for 5 years. I have two children. Elise, a senior in high school, may be on her way to the Coast Guard Academy and my son Gus who is a freshman and wrestling for the University of Virginia. I am remarried to a wonderful woman, Ashely, who helps me run Defense.

Q: How did you come up with the idea for Defense Soap?
A: About 8 years ago my entire youth wrestling team was decimated with ringworm...around 100 cases. We were quarantined and thrown out of the high school we practiced at. I kept asking why no one made a soap to help these kids with ringworm. It got so bad that I decided to tackle the problem myself..did some research and came up with Defense.

Q: Was there a goal of where you wanted to take it, or was it more just seeing how far you could go with it?
A: Actually I didn't even plan on starting a business. I just wanted a soap for my kid and the kids that wrestled for me. It worked so well that the word spread fast and everybody started asking for it. I'm a little slow..when the light bulb came on I started Defense. 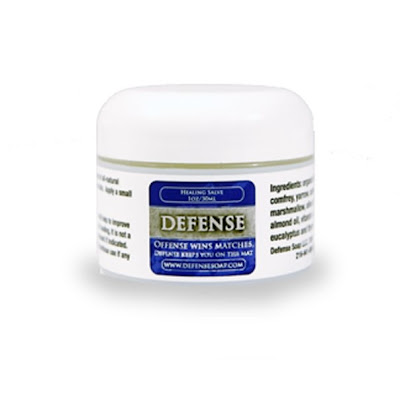 Q: Did you ever think you would actually be sponsoring fighters?
A: I was very narrow minded and inexperienced in the business world. I never saw my soap going much farther then youth wrestling. So to answer the question...definitely not. But we sponsor a lot of fighters, programs and tournaments.

Q: What makes Defense Soap better than other products?
A: First we insist that Defense is made with only the highest quality natural ingredients available. Defense is really the Cadillac of soaps. The secret is that our active ingredients have anti fungal and antibacterial properties which allows your normal skin flora to remain balanced letting your body protect itself from infection. If you were to use just an antibacterial soap you would kill the bacteria on your skin that normally fights ringworm. Whack the bacteria and the fungus grows.

Q: Any plans to expand into other areas?
A: Defense works so well on acne and bacne that we decided to develop it even further. We placed oatmeal in Defense for exfoliating purposes. This bar of soap is called Natracil and can be found at www.natracil.com. We are finding that woman fighters like this soap. It's not as bold as Defense and they like the exfoliate yet it possess all of the protective ingredients Defense has. We have also just launched our new Defense Barrier Foam. A pre workout foam developed to help keep mat grime from ever contacting your skin.

Q: You sponsor fighters. Can you let people know what athletes you sponsor?
A: A lot...let's see, Jake Shields, Robert Drysdale, Duane Ludwig (my wife is faxing in Duane's sponsorship contract for UFC 122 while I'm doing this interview)....I guess those would be the bigger names. I much rather sponsor a tournament though where I can get my product into the hands of a few hundred competitors. We just sponsored the US Open. We sent 1,000 shower gels to that event.

Q: When looking to sponsor fighters, what do you look for?
A: I really don't look for fighters to sponsor. They usually come to me. To be very honest, I don't sponsor fighters for brand awareness. I sponsor them to help them out. Can you tell me who was on Brock Lesner's shorts the last time he fought? Or how about Randy Couture's? It is not the best place to spend your money if you are looking for bang for your buck. This is why I would rather sponsor the little guy. The money we spend is definitely appreciated by the guy who is working full time and trying to break into the ranks.

Q: I want to single out my friend Tisha Rodrigues. How did you find out about her and what made her someone you would want to work with?
A: Well I definitely was aware of the ads she did with our competitor. "wink" Tisha approached us. Actually my Great Britain reseller informed me that Tisha was looking to talk to us. She wasn't happy with the other company and when we told her what we could do for her she was on board. She has a lot of drive and a lot of friends. In the world of viral marketing those are two great attributes. 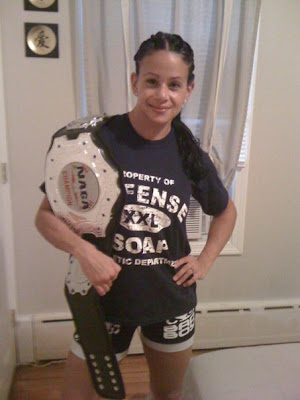 Q: Have you ever trained yourself to fight?
A: I'm a little past my prime for that. I wrestled collegiately between 1985 and 1989. I was a DI NCAA qualifier in 88. I was totally unaware of the MMA scene if there even was one in 89 to go into. I still wrestle with the kids I coach and hit the heavy bag. I planned to fight a couple of times just for marketing reasons but that never really evolved. My ground game would be pretty good but I would probably get knocked out before I got there.

Q: Am I correct in assuming you are a fan of the sport? If so, any fighters you yourself like to watch?
A: I am a huge fan. I don't miss a fight and I love it when wrestlers rule. Gray Maynard is one of my favorites because he went to the same high school as my son...the high school that I coach the feeder program for. Plus Gray is just a great guy. He has picked me up and dropped me off at the airport in Vegas on more then one occasion and in Boston we were out until 4:30am after his fight with Kenny Florian. Just a real down to earth guy.

Q: Finish this sentence. "In five years Defense Soap will be___"
A: Wet and slippery" Sorry couldn't resist. We will be right where we are now..the number one soap for combat athletes. I have not drawn a salary yet from Defense in the 5 years that we have been in business. Everything we make goes right back into the community of the combat athlete. Currently we have pledged $1,000.00 to MMA 4 a Cure to help bring awareness to childhood cancer. We sponsors fighters, programs, tournaments or any good cause a combat athlete presents to us. So to get back to the question...in 5 years I will be retired from the Cleveland Police Department. I will then draw a salary to supplement my income. I will have 10 years under my belt giving back to our community.

Q: Can you tell people how they can find out more about Defense Soap?
A: You can always visit our website www.defensesoap.com. There are a ton of articles there, many I have written specifically for our needs. Or call me toll free at 866-544-1689. I enjoy talking to my customers but I have to warn you, you may call asking about soap and end up talking about the next UFC.
Q: Anything I may have missed that you want to mention?
A: I think you got it covered. I appreciate the time and effort that you put into this interview.

Q: Again, I thank you for taking the time for this. Any last words before you go?
A: Thanks for having us and remember...."Offense Wins Matches. Defense Keeps You on the Mat."