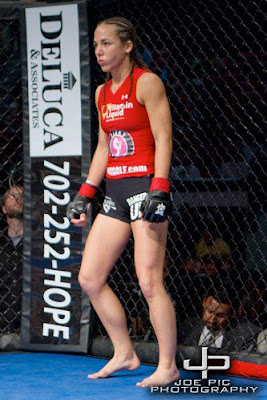 On September 2nd Jordan McDonald will make her second attempt at the Tuff-n-Uff 110LB title when she faces Jinh Yu. McDonald is coming off a loss by very close decision in her last fight against Paulina Granados, a fight where she says she just wasn't herself. In fact, it is her second loss in a row, and while she says she has days where some doubt may creep in, she still knows she has tremendous potential and a bright future in the sport. Here are Jordan's thoughts on the fight and other things.

Q: You are coming off a close decision loss to Paulina Granados, did you feel you did enough to win?
A: No, I don't. I knew when they were going to call out the decision what I thought it was going to be. I think if I fought the way I know and can and have before and usually do, I think I would have won the fight easily. I had one of those off nights where I would go back to my corner and they would say "what are you doing". It was one of those nights where I wasn't dialed in and didn't perform. I was really frustrated with my performance because of that. Yes it was close, but no I didn't do enough to win, but I easily could have if I fought like me.

Q: Outside of it being "one of those nights", is there anything you feel you could have done and gotten the win?
A: I think if I would have not stuffed my punches and allowed her to clinch up with me and not play the clinch game. In some of her comments she alluded to maybe I was clinching with her, but that is not what I wanted to happen. I kept stuffing my punches and she would clinch up with me and not let go. I should have kept my distance and done my thing like I have done a million times before. Sometimes it just happens where I don't think any of use can explain it but we don't show up. I think that is what happened that night. 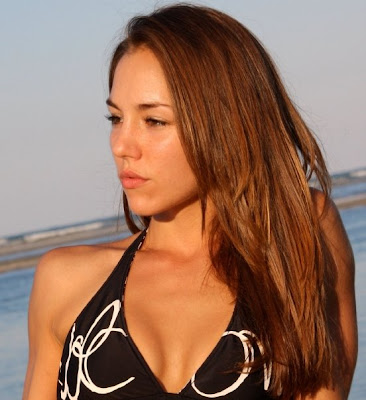 Q: It was your second loss in a row after starting 4-1, is it hard at that point to fight off any self doubt?
A: I am not gonna lie. Fighting is a very emotional sport. I have days where I feel I can beat the best and I have days where I wonder if I am cut out to be a fighter. I think that is normal. I just have to be reasonable and not think out of emotion. When I do that, I know I am a good fighter and good enough to be considered one of the top amateurs and that my pro career is very promising. Yes, it is difficult to deal with the every day mental pressures of being a fighter and have two losses in a row. Ninety percent of the game is mental and I have put myself through a test and feel strong and still believe in myself.

Q: You are fighting Jinh Yu coming up, what do you know about her?
A: I know next to nothing about her. There is one not even entire round of one of her fights on video. I haven't found any other video of her. I found a couple written interviews, but almost nothing. When they first set the fight up I was told she is 1-1 and was later told she was 3-1. For a couple weeks I didn't know who her opponents were because none of the records on-line are correct. I am pretty sure she is a south-paw, pretty sure she has a Muay-Thai background because she wore Muay-Thai shorts in a picture haha. That's o.k. with me, it allows me to focus on myself and she cant get into my head because I know nothing about her.Just focus on south-paw strategy and that's it. 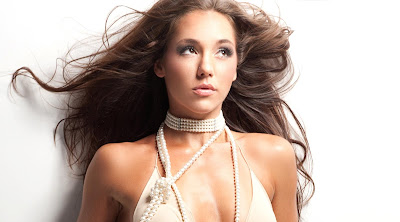 Q: What would the title mean to you?
A: It is something I have been chasing since I moved here. I sacrificed a lot to come out here. To have something to show for it, especially since I have always coveted the Tuff-N-Uff title belt because I consider them one of the top amateur promotions in the country if not the number one. So to have a belt in my weight class on the tail end of my amateur career would make the sacrifices worth it. It would symbolize a lot and make it easier to rationalize all of it.

Q: You fought for the title once before against Liz McCarthy, from that fight to this fight how are you better?
A: I have pieced my game together much more. I have smoothed a lot of my rough edges. Despite the two losses my confidence has grown. I was a home town hero in South Carolina and didn't have a lot of people my size around me to challenge me. here I have gone toe to toe with the best and held my own. I have more confidence, a more synergistic game and have smoothed my rough edges. 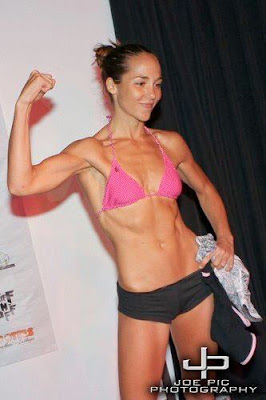 Q: So not knowing much about her, I assume you just focus on what you can do and not worry about what she can do?
A: Absolutely! It is good to know what you might see from an opponent and have counters planned. But you also run the risk of letting them get in your head and respect them too much. I said this in another interview, of course I want to win, but instead of obsessing about the win, all I want this fight is to perform to my abilities. I am taking a lot of the pressure off me in one area and putting it in a more reasonable area. If I win, if I don't win, I will be ecstatic if I do what I can do because I didn't do that last time. Just focusing on what I can do sets me up very well.

Q: Do you have a prediction?
A: My prediction is, if I do not overwhelm her in the first round, I hope to finish it in the second. I like that none of my wins went the distance. I like to stop my opponents. That is always a goal in that back of my mind.

Q: Paulina has said she deserves this title shot. In an interview with MMA Rising you said you are not surprised she said that, why were you not surprised?
A: I do not know her but from what people have told me she said, she has been extremely cocky and mouthy. I have stayed pretty ignorant of it all. I saw her post fight interview after our fight and I feel there was a little, I don't know if disrespectful is the right word, but I was put off by it. She barely won that fight and barely won against a sub-par me. I feel that Tuff-N-Uff is aware of that. She was given the opportunity to fight me for the title, she was offered the fight and she declined. If she had run through me, maybe she would have more ground to stand on, but she didn't. So that's that. We'll get to fight again, there is not enough of us. I will make sure for that fight I show up and we will see how it works out.

Q: You mentioned the pro career, have you set a time-table on that?
A: I would love to go pro on Invicta's February card as long as I don't get injuries and this fight goes well and my training goes well. I have not had serious talks with anyone but that is of today what I would like. I am not looking past this fight, but am looking towards the future. I wanna go pro and would love to fight for Invicta. 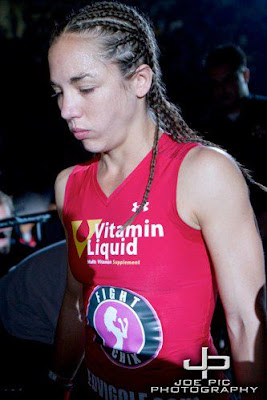 Q: Anyone you want to thank?
A: Fight Chix, The Gun Store, Fight Dentist, Babes of MMA, Pureform Supplements and Valley Spine Chiropractic.
Posted by JasonDBK at 10:22 PM