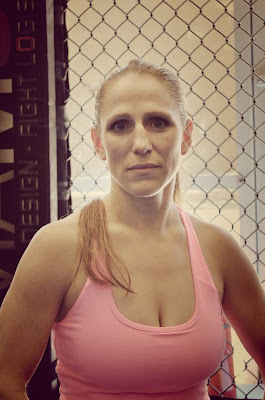 
After over a year away from the cage due to having trouble getting fights and an injury, Katie Casimir returns to the cage in November. Katie first gained interest in combat sports after watching a documentary on boxing and then finally started training herself. She won her pro debut before losing her second fight. As women's MMA continues to grow, Katie is someone I hope to see get her name out there more as she is someone who I think is a very positive role model that new fighters can look up to.

Q: Can you talk about how you got started training for the sport?
A: I watched a documentary on women boxers when I was like fifteen and thought it was the coolest thing I had ever seen. My parents were like "absolutely not." I guess it just stuck with me and I worked in a doctors office across from a kickboxing gym and decided I would go do it. I went over and started. I didn't tell anyone I wanted to fight but I knew I did. I started taking classes and learning. It was about four years before I got to fight cause everything kept falling through.

Q: When you started training, was it harder than expected?
A: Being an athlete, stuff comes really easy for me and this was hard. I couldn't help it, I just wanted it so bad. The fact it was a challenge and didn't come easy made me love it even more.

Q: When you were walking out for that first fight, were you nervous or excited or both?
A: It was kinda funny because we were before the intermission, after the intermission, before, after, so I warmed up in the stairs and it ended up being before intermission. I was calm, so calm for my first fight. After that it got worse, but the first fight was really easy.

Q: Did any family or friends react negative to you fighting?
A: I wouldn't say negative. My mom was like "I don't want anyone to kick you in your pretty face", but mostly everyone has been supportive. My sister, held my bucket in the corner cause I only had my coach with me. Everyone was really supportive. 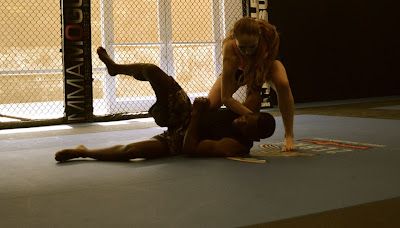 Q: You won your pro debut in late 2010 and then didn't fight until May 2012, was there a reason for the long delay?
A: It is just a matter of finding fights. I didn't wanna wait that long but it is just how things work out. I didn't have reasonable offers. The offered catch-weights at like 130 and I'm like"I don't even weight 130."

Q: The May fight was a loss to Melissa Steele. Was it hard to get over that first pro loss?
A: No! I was disappointed obviously but there were a lot of things leading up to that fight that were just insane and so to perform how I did and finish with winning the third round, I was really proud.

Q: Do you look back and analyze what you could have done differently?
A: Oh absolutely! That is how you learn. I was frustrated with a couple things I did and didn't do in there but when I do that, I can see why I didn't and what I need to fix for next time. I wasn't active enough and hung back and waited and don't know why. You analyze it and fix it for the next time.

Q: Since then you have not fought, is that again just trouble getting a fight?
A: Yeah, I was supposed to fight in June but tore my hamstring something fierce and am just getting back to training now. I am fighting the same girl on November 23rd.

Q: Recovering from an injury, when you get back to training, are you extra cautious?
A: Thus far it has been extremely cautious because that was awful. My physical therapist friend told me "when you feel better, wait to more weeks." So I have been cautious, drilling, trying to get my cardio and strength back up. I did live rolling for the first time yesterday and was picky and only waned to roll with my husband because I know he isn't gonna do anything that will hurt me. It went well and I am ready to jump back in full steam.

Q: Can you share who it is you are fighting?
A: Her name is Alida Gray. Q: How do you feel you match up with her?
A: I really try not to know a lot about my opponents before I fight them. I know that when I was supposed to fight her, it was her first pro fight and she was undefeated as an amateur. She has won two fights since then. They found a replacement for me and she won that fight and Patricia Vidonic who is a pretty experienced fighter. I think we match up well. She looks to be more ground and I am more stand-up.

Q: With everything going on in women's MMA and it taking off, do you wish you had started when you first saw that documentary?
A: I look at a lot of things in my life. In high school a guy wanted me to come to his Jiu-Jitsu school but I had things going on. I grew up in a small town and there was no boxing gym where I grew up and the Jiu-Jitsu school was thirty miles away so it was more than we could sign on for. I feel like my basketball has been amazing for my footwork. In some ways I wish I had been doing it a long time and massive amounts of experience which would make me more marketable but at the same time, coming in with the maturity and not taking the head trauma helps a little bit. I don't have any regrets, things fall in to place at the right time for the right reasons.

Q: Tomorrow night The Ultimate Fighter debuts with female coaches and fighters, as a female fighter yourself, how excited are you for that?
A: I am really excited. I think it is about time. The talent pool is now there. I know a couple girls fighting on the show tomorrow and I am excited for them to get that exposure. The men have all this history and you know who they are but a lot of times, these girls, you have no idea. Everyone knows Ronda Rousey is, but did anyone know Rosi Sexton? This is important for the community and the casual fan will now make a better connection to these girls and realize are struggles and what we are doing. It is really cool to see that. 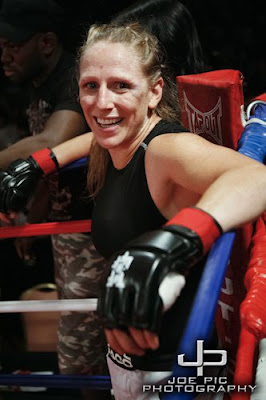 Q: If you could spend a day training with someone you never trained with, who would it be?
A: I could come up with a good list. I have been doing a lot of Judo lately and would enjoy going to work with Ronda Rousey for a day and pick her her brain.

Q: Anyone you want to thank?
A: First of all, my husband, my best training partner and my ground coach, Bendy Casimir. My best friend Melissa Henricks, she used to be my training partner and now she supports me and is here for me through everything. My coaches,June Bug, Allen Antoniewicz & Ivan Rangelov. My kids at Drysdale's Jiu-Jitsu, I love them, when I coach and teach them, I learn so much.
Posted by JasonDBK at 5:06 PM