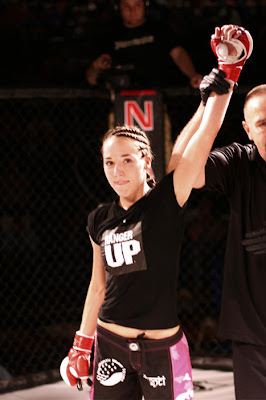 Q: First, for those who may have missed your previous interview, can you talk about how you got started in the sport?
A: I was actually surfing competitively at the time and a guy named Maurice Travis, who is a 3 time world Muay Thai and Super Brawl champion, moved to Myrtle Beach and opened a dojo. I had a bunch of guy friends that had gone and knew it was something I would like so they urged me to try it. After I tried it, I loved it, and got into it big time. I got away from it a few times, but after my first MMA fight in 2009 I was officially hooked.

Q: You quit your job and moved to Las Vegas to train full time. How has Las Vegas been?
A: It's been amazing. I went from working 40-50 hours a week and having to commute over an hour to get to the gym, now I work barely 20 hours a week, very part time, I train 2-3 times a day most days. I am around world class athletes and am getting coached by world class coaches. Its a dream, there is hard work involved but I am so enchanted by the opportunities around me and the fact that I've given myself a chance to go for my dream. Back home it was tough and now alot of things are easier. Still hard work to do, but I get a chance to train with great people, so its been awesome.

Q: Your first interview you said you were kind of searching to find the gym that would be a good fit for you. Did you find that gym?
A: Well the way it seems to work in Vegas is everyone seems to have a membership to at least two gyms. I only have a membership to one gym right now, and that's Robert Drysdale's. He is there teaching Jiu-Jitsu and grappling and Mark Beecher has become my Muay Thai coach. I also go to Extreme Couture and worked with Gil Martinez on my boxing, and I have been checking out Throw Down also because they have girls that train there. So probably in the next month I will get a membership at Extreme Couture or Throw Down in addition, but Drysdale is my home base.

Q; You are a very marketable fighter. Do you think that makes gyms want someone like you?
A: Yeah, I know that Extreme had talked to me. Its definitely a plus. A lot of these gyms are trying to get their female section to take off, so they would like to have a well known fighter. I am not well known yet but have the potential to be. So I am trying to use that to my advantage. These memberships are expensive so if I can work something out. So if I can do the gym a favor and give them exposure, that would be cool and behoove them to have me there.

Q: You have a fight with Liza McCarthy coming up for the Tuff-N-N-Uff title. What do you know about her?
A: Not a whole lot. The gist of what I get is she is like me, no gaping holes in her game. Solid stand-up, decent ground, a lot of people assume because she is from Oregon that she may have a wrestling background. There is a little video on her, and I know she has done some Jiu-Jitsu competitions and done well. I think she is a pretty good all-around amateur fighter. I don't think she has fought anyone as good as me yet. The last girl she fought was tough but she was 4'10" so fighting me will be different. I don't think either one of us will run through the other one. I think its a really good fight. I think she is a step-up in competition for me. I have gradually gone up in difficulty with opponents and she is the next step for me.

Q: So safe to say with the opponent and title, this is your biggest fight?
A: Absolutely. This is the most attention I have ever gotten for a fight, most on the line. This is a title fight, main event, posters with my face. We will see when fight night comes, right now I am enjoying it. There is added pressure but I like it and it is pumping me up. Another thing pumping me up is my mom and sisters are flying out for the fight. My mom has never seen me fight live. So all these things that could be negative pressure have been positive pressure for me.

Q: Knowing what she can do, and what you can do, is thee that one thing you have to do to win?
A: I think I just cant make any mistakes. I think someone with an all-around solid game like she has, I need to impose my game plan on her and not let her impose hers on me. Don't give her anything to capitalize on because she seems to have the skills to do so. My main thing is to not do anything crazy, have a solid game plan and not make any mistakes.

Q: Any prediction on how it ends?
A: I hate doing those things cause MMA is so unpredictable. If it went the way I wanted it to I would run in there and knock her out in the first ten seconds haha. But for shits-n-giggles, lets say, 2nd round ground and pound.... me winning obviously.

Q: For people who would say giving up a good job and moving across country is crazy, would winning the title vindicate that?
A: I think it would give me more credibility. There are always haters saying "why are you doing that, you are an amateur, you don't have that great of a chance at success", so winning a title my first fight out there would show I have a chance to make it big and give me credibility for sure.

Q: Any idea what you want next, or are you not thinking about that?
A: I am but I am not real sure. I wanna go pro soon, its tough as an amateur financially. There is more exposure and sponsorship opportunities when you go pro. So its something I am thinking about. I will go pro after this one or one more fight, but not more than that I don't think. Just because a lot of people don't know how old I am. I am getting older and don't have a lot of time. I wanna make sure I am prepared but also feel an urgency to go pro.

Q: Rules are a little different. Is there anything as a pro you can do that would be good for your game?
A: Elbows! Elbows are something that goes both ways and I am excited to be able to elbow people, but you also have to look out for elbows. Being that my base is Muay Thai, I have always, not sparred, but learned techniques with elbows, so I can utilize them, especially on the ground. I would be excited to be able to do that. A lot of states I have fought in I can head kick, and Vegas is the same way, so there is not a whole lot of difference in say South Carolina fighting and Nevada fighting between amateur and pro besides elbows and maybe neck cranks and ankle locks. But being able to elbow is the biggest thing.

Q; Are there any fighters you enjoy watching and maybe trying to learn from?
A: Absolutely! Before I moved here it was anyone who was good at what they did. I would love to have a style like Jose Aldo, GSP's wrestling, Megumi Fuji's..... actually I love watching everything about the way she fights. Now that I am in Vegas, I am also going to California every so often. I am meeting and training with some amazing people. I met Jessica Penne and she is amazing, she is so good, where I hope to be in 2 years. She is exactly my size so it is fascinating to watch her and spar with her. She moves like me, when you are smaller you have to do things a certain way in order for them to work, and I like working with her. Jessica Riccozi who was a champion boxer is here in Vegas and she helps me. Its cool to train with people who are so good. I used to just watch people on tv and admire them, now I get to admire them person to person. its really cool.

Q: The important question, when are you coming back to Ohio?
A: That would be the only amateur fight I would take. I love it there with the NAAFS with Nichole Long and Greg Kalikas and everybody, so I wanna make that happen, we just gotta figure something out. The month of September I will be visiting home, but something after that I would be open for.

Q: Before we finish, anyone you want to thank or mention?
A: I just wanna thank Robert Drysdale, Mark Beecher, Gil Martinez, all my training partners, everyone helping me get ready. When I moved here I didn't know anybody, and I a overwhelmed at how much people help and invest time in me. So everyone who helps me and spends time making me a better fighter I appreciate it.
Posted by JasonDBK at 7:57 PM