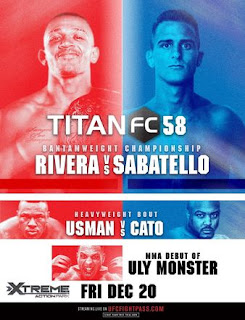 Titan FC 58 took place December 20th from Xtreme Action Park in Fort Lauderdale, Florida. In the Main Event, Irwin Rivera retained his bantamweight title with a fourth round stoppage of Danny Sabatello. Rounds one and two saw Sabatello use takedowns and top control to jump out in front but late in round two Rivera landed a flying knee that opened a bad cut on Sabatello. From then on Rivera took control, stuffing takedown attempts andhurting Sabatello with punches. Late in the fourth he dropped him with a body shot and while the ref was late in stopping it, he finally did. Here are all your results and our Of The Night Awards.

Submission of the Night: Muhammad Naimov

Knockout of the Night: Irwin Rivera

Fight of the Night: Irwin Rivera vs Danny Sabatello
Posted by JasonDBK at 7:03 PM