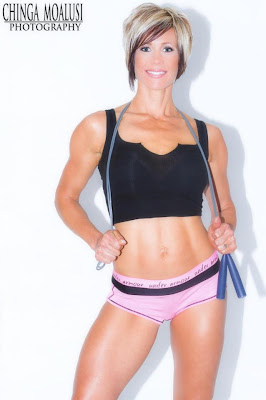 
After two very good showings in 2012, Amy Lescher won her IFPA pro card at the Great Lakes Supernatural. In that show, she won the over 35, won her class and won the overall. What is most impressive about Amy is her attitude, towards fitness, health and competing. It is an attitude that has taken her far so far and will no doubt take her far competing in the pro ranks as well.


Q: Can you talk about how you got started in the gym?
A: Well I was an athlete my entire life. I played competitive softball and soccer and followed that with college soccer. I really started weight training in college and continued after college but got more into marathon running. After having my now two year old, I wanted a better way of living besides stomping my knees and joints on the ground every day through running. I started weight training more regularly and got turned on to this way of life.

Q: What led you to competing?
A: It was actually shortly after I decided to pick up the weights a little more. A friend of mine had competed and I always looked at Oxygen Magazine and the women in the back and competition reviews and always wanted to do that. In college I was working out to Cory Everson videos. My girlfriend said "I think you can do it", so the rest is history. 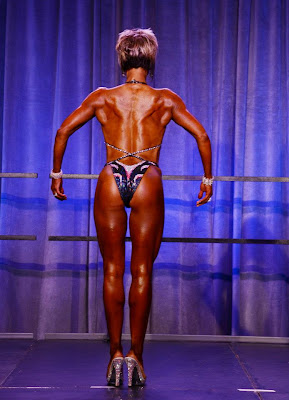 Q: The first time, right before you went on stage, were you nervous?
A: I wasn't. I actually grew up being a dancer as well and did some competitive dancing in college as well. Being on stage was comfortable to me. I had been there before and really enjoy that portion of the competition the most.

Q: A lot of girls I interview say that after the first one it becomes addicting, was that the case with you?
A: I'd say that was the case even before I did my first show. I would say to my trainer at the time that I didn't want to do the "one and done". I wouldn't say addicting as much as exciting and you are chasing that excitement. The whole process is more of a lifestyle than addiction. I don't like that word but I can see where they would say that.

Q: Going in to the Great Lakes Supernatural you had done a couple shows in 2012 and done well, going into this one did you feel the pro card was a realistic possibility?
A: Yeah, I had been placing second in masters the two prior shows, even my very first show I placed second in masters, and was placing third and fourth in open. I felt this year I had made some changes, particularly the first show in September and this show was October, I had made a lot of changes. My coach had me do different cardio and lower body routines. It felt like the pro card was eminent, it was hanging there for me, it was just trying to get that peak condition to be able to get that first place.

Q: In that show, you won masters, won your class, won the overall and of course the pro card. When you realized you were a pro, do you remember what went through your head?
A: I was almost like "Yes, all this work paid off." Not that everybody else doesn't work their but off because they do, but the four weeks prior to that show it was blood, sweat and tears every day. I did not get a day off. I hadn't had a day off in sixteen weeks. I was doing two-a-days the majority of the time to get in peak condition because I had some setbacks in 2011 when after my first show I had surgery and couldn't compete or even workout for ten weeks. It was almost like starting over. In that first minute it was "yes, all this hard work does pay off."

Q: For you, does the pro card carry any more responsibility as far as how you portray yourself in the industry?
A: Absolutely! It is like any other professional athlete, whether it be baseball, football, whatever, obviously we aren't paid like those athletes. However, I feel there is a responsibility as far as attitude, being a positive motivating entity is first and foremost. If I was still an amateur I would feel the same way. I think it is driven home a little more, now I have an athlete page and people look at me and ask questions. You need to know what you are talking about, just because you are a pro it doesn't not make you a professional coach or nutritionist. I happen to be a personal trainer but I don't pretend to know anything about nutrition other than the basic nutrition, I know nothing about competition diet, I have a coach for that. I don't want to give out wrong advice and that is where some go wrong. What knowledge you put out there should be backed up with experience and education, not just cause you have a pro card. 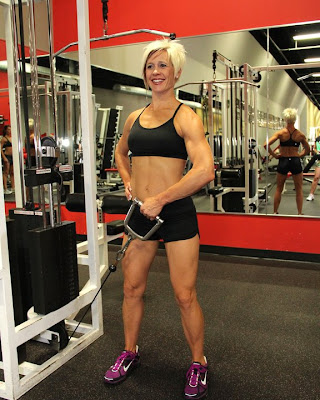 Q: Do you know when you want to make your pro debut?
A: I will compete July at the St. Louis Masters show, the St. Louis Naturals and the following week in Sacramento and then take some time and compete in the fall. I am looking at four shows this year.

Q: Where do you need to be better for the pro stage?
A: The quads and lower body all together. My glutes came up nicely towards the end of last year but they can be improved. My quads are my downfall. I have a large bone structure frame. My hips are outside my quad sweep so my sweep needs to be bigger. I am not training shoulders right now, they are massive compared to the rest of my body. I have to tame those down. I need more symmetry.

Q: When you are prepping, is it hard to balance that with being a mother?
A: Yes! The toughest part is that you are tired. I have a nine year old and two year old. The nine year old is pretty self sufficient but the two year old takes a lot of my time and energy. It is demanding the last weeks because my husband travels and I am a single parent during the week. My oldest helps a lot with my younger daughter. It is difficult but it is definitely doable. If you are prepared, you can adjust some things to help with that. 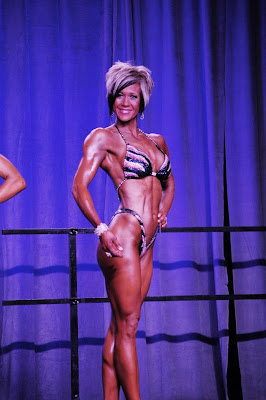 Q: What is the biggest piece of advice you would give someone who is a mother and wants to train more?
A: Incorporate your kids in your workout. I have one pound dumbbells for my two year old and my nine year old works out with me if I cant get to the gym. You can do things at home and get a decent workout and offset that with days you can get to the gym. I have a bosu ball in my basement that the girls like to bounce on. They do their own thing in my presence but pick up the weights to. Include them, don't just say you can't work out cause you have kids. Run in the backyard, make it fun.

Q: If you could spend one day training with someone you have never trained with, who would it be?
A: That is hard. At this moment in time it would have to be Erin Stern. 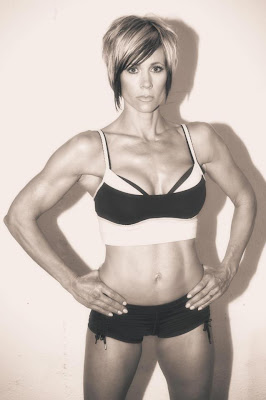 Q: Anyone you want to thank?
A: My husband first and foremost and my kids. They are my support system and keep me on track. My sponsor, Pro Body Solutions, excellent supplements. Alex Ellis, she is my coach and runs The Complete Package and does it all.
Posted by JasonDBK at 6:04 PM