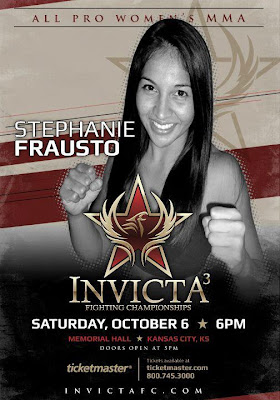 With each fight Stephanie Frausto has shown improvement in at least one aspect of her game. Still young in her career she has already fought some very tough competition and held her own and impressed, even in the fights where she didn't get the win. On October 6th in the Invicta cage she again faces tough competition when she takes on Amy Davis. While this fight may be somewhat under the radar, don't be surprised if this fights steals the show.

Q: You are coming off of a win over Diana Rael. How did you feel about your performance in that fight?
A: In my fight with Diana I think I probably came out to fast. I didn't try and pace myself for that one because I was trying to go for the finish. I got the finish but I think I could use some improvements. I was happy I won. It was a pretty good fight.

Q: Ever since the Ashley Cummins fight, and including the Cummins fight, you have show a great deal of improvement, what do you attribute that to?
A: My coach Jorge Gurgel works with me every day. My sister Zoila (Gurgel) helps a lot. Her injury is healed and she can train a lot more with me. Her training with me helped me improve also.

Q: You are fighting on Invicta against Amy Davis, what does it mean to you to fight for a company that is doing such big things for women's MMA?
A: Ever since I saw the first Invicta card I was like "wow, I really wanna be on one of those cards", so I am really happy I am getting to do that now. 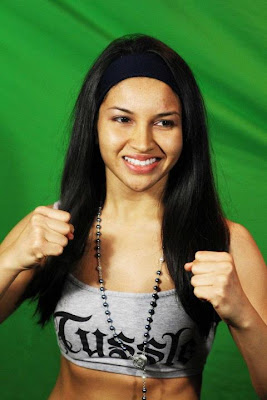 Q: What do you know about Amy?
A: Amy is a stand-up Muay-Thai fighter. She is 3-3. Pretty traditional Muay-Thai. She did beat Nicdali (Rivera-Calanoc) with a Kimura so I will be looking out for that to. I am just gonna fight my fight.

Q: A lot of fights people have an idea if it will be more stand-up or more on the ground, but in this fight, I feel like you can't really tell till the fight actually happens, would you agree?
A: Yeah pretty much. With Amy Davis, I know she is a stand-up fighter, so whatever my coaches tell me to do, I am gonna do it, I am pretty much the robot. Whatever they scream I will do it.

Q: With it being all female, and all the eyes of everyone who follows women's MMA watching, is there a part of you that not only wants to win, but have the show-stealing fight every talks about after?
A: Oh Yeah! On that card is a whole bunch of awesome women fighters. I am probably one of the first fights so I can watch all the other fights after, so I am excited about that. 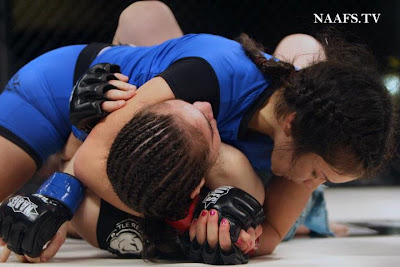 Q: Do you have a prediction?
A: We are gonna try and end it in the first round, if not, I am prepared to go the distance.

Q: A lot of times when people write about you, they refer to you as "Zoila's younger sister". Does it ever bother you to always be referred to as that as opposed to maybe just "Stephanie Frausto, talented fighter".
A: I've been the little sister all my life so I am used to being the little sister. It was my nickname for the soccer team. I love being her little sister, I don't mind it at all. 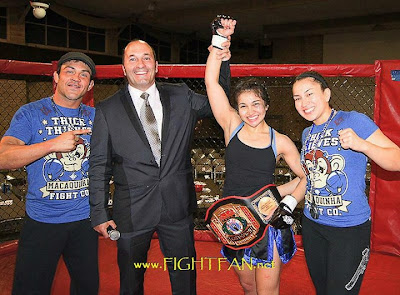 Q: Anyone you want to thank?
A: My teammates at JG MMA, My coach Jorge Gurgel, My sister, Jeremiah, my manager. Thank you Jason for the interview. My mom, she does everything for me.
Posted by JasonDBK at 2:26 PM