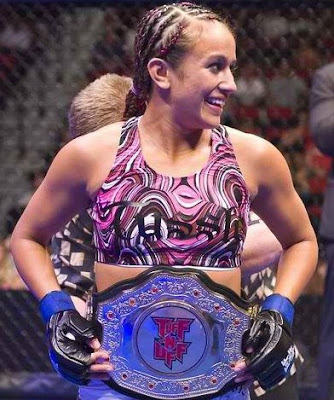 Often you read articles and things on Jordan Gaza and the article begins with how "hot" she is, or something to that affect before they talk about her fighting. And make no mistake, Jordan is a beautiful young woman. But there is more to Jordan..... much more. She is a talented fighter who is always improving. That talent was proven when she won a title with Tuff-N-Uff. She has since lost that title, however knowing the hard work and dedication Jordan has, there are many more titles in her future. A big part of MMA is the fans, and few people I have come across appreciate their fans as much as Jordan. I have said before and will say again, if you are a fan of WMMA or the sport in general, you need to be a fan of Jordan.

Q: Can you talk about how you got started in the sport?
A: I started Jiu-Jitsu when I was twelve I guess. My gym just started leaning more towards MMA. I hated it at first, I hated getting hit in the face. As I got older and watched it more and watched the guys fight for the gym, I just jumped into it.

Q: Fighting isn't your typical female sport. Did your family and friends understand why you were doing it?
A: My family really loves it. Everyone is mad when I lose, I live at home and they cook all my healthy meals and are so helpful. My friends go to my fights and find it interesting but they are not that into it. I was a cheerleader and grew up with cheerleaders so they aren't to into it.

Q: You are still young, a lot of people your age are more into the party scene. Do you ever feel you are missing out on anything?
A: No, I see my friends. Once I graduated its been hard to keep in touch cause alot of them went away to college and I go to the University here. I see myself as being so much more successful then the people who party every night. I am happy with what I am doing. Dieting and working out is fine with me. I keep the people in my life that want to accept it and the ones who don't I have lost as friends. 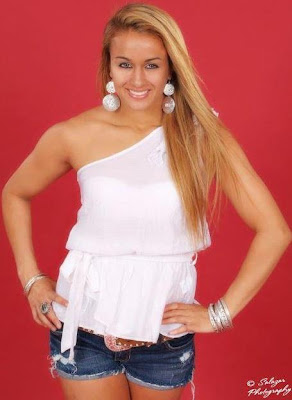 Q: A lot of times you read stuff about you and it always starts out with about your looks, do you ever read it and wanna say, "by the way I am a really good fighter to"?
A: Haha yes. I do try and use my looks to get me a little big further, just like Ronda Rousey and Miesha Tate, they have looks to and skills. But people need to realize that everyone who fights, we all train the same, train hard. Sometimes I get comments saying "can you fight or do you just put out pictures", but I back up everything I do and work just as hard as everyone. So I wish people took time to watch my videos and watch my fights, and I appreciate people who do.

Q: I always say I like people like you or Taylor Stratford who got a lot of attention very early and never let it go to your head. Is it hard to keep it from going to your head?
A: I don't think its to hard. I hate cocky people, something about it annoys me. I am really humble and will never let anything go to my head.

Q: You just went and trained with Miesha Tate. How was that experience?
A: It was so awesome. I went last summer to train with Felice Herrig and went to Jackson's before that, those three places are were there are pro level female fighters. I never trained with someone who is training for such a big fight. Miesha has a huge fight coming up and to take time out of my life here to see what its like to train for something so big was really cool. She is training so hard for the fight. 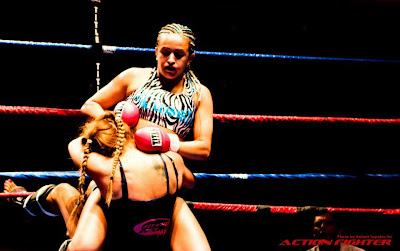 Q: How do you see the fight with Ronda going?
A: She has it completely in the bag. Right now I am just getting into watching people's videos. I realize watching videos will help me, so I watch Ronda's and Miesha's. I just think Miesha Tate is a better all around fighter, and her wrestling is amazing and I am pretty sure it will beat Ronda's Judo. I think wrestling cancels out Judo actually.

Q: You are early in your career, but till now, whats your career highlight?
A: I am proudest of my fight in Vegas when I won the Tuff-N-Uff title. I lost the next fight and then won in December, but that was the coolest feeling and I want the feeling of excitement back again. I always think about that and hope for more feelings like that.

Q: You lost that belt to Jillian Lybarger, looking back, is there something you wish you did different?
A: Oh yea, I lost that fight and everyone says it didn't look like me out there. I cant make excuses, she is an awesome fighter and awesome person. I had a lot of stuff on my mind. It was a big loss. I did train hard and didn't slack off, but something was different, and it happens to all of us.

Q: Is that a fight you would like to have again?
A: Oh yea, it would be awesome. She is a great person and probably my most respectful person. I like it when there is no hate involved and its kept respectful.

Q: You mentioned your win in December, from your first fight till that fight, how are you a better fighter?
A: I am starting to realize my strong points. MMA to me was just go out there and throw and land some lucky shots. I never wanted to use my Jiu-Jitsu because I thought if I took it to the ground I would end up on my back and get punched in the face. I am using it more now and my stand up is getting good in sparring and training and I am feeling like an all around fighter now. Then I fight and take it to the ground quick cause its my home base. So the next few fights my coach wants me to keep it standing.

Q: Are there any fighters you like to watch and maybe learn from?
A: I wouldn't say there is a certain fighter. My main goal is to be the best all around fighter, everyone has a strong point so I like to learn what I can from different fighters.

Q: Where do you see yourself in the sport in five years?
A: Hopefully the furthest I can be in five years haha. I plan to go pro hopefully by the end of the summer. We are thinking about that. In five years I hope all the hard work has paid off by then.

Q: Another thing I like is, even on Facebook, you seem to enjoy interacting with your fans and appreciate them, is that accurate?
A: Oh yeah. Sometimes I am in class on my Ipad just cracking up at what people write. Especially on Twitter, I don't even know who they are. I love support and it makes me happy. Support means a lot to me and I feel like I have to write back and thank everyone. 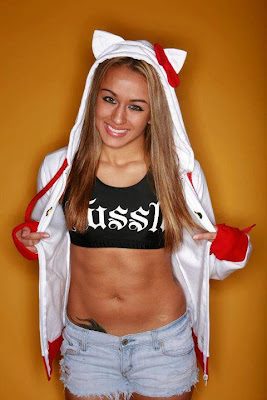 Q: Anything coming up?
A: I have a fight in Louisiana on march 24th and it is there first female title fight. So its exciting.

Q: Anyone you want to thank?
A: I wanna thank my team at Weapons at Hand, my Jiu-Jitsu team at Gracie Barra and all my fans, my sponsors, and everyone who supports me, especially my family.
Posted by JasonDBK at 4:40 PM