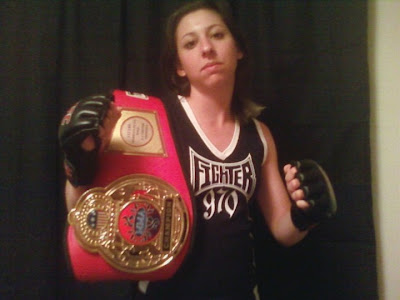 Diana Rael is someone I can say is a favorite of mine. She is never in a boring fight and always goes all out to entertain the fans. In august she put on an amazing performance winning a decision over Angelica Chavez in a fight I recommend you find and watch. Her most recent fight was a loss by rear naked choke against Michelle Waterson, in a fight she was actually doing very well in before the choke. The future of women's MMA is bright when that future includes people like Diana Rael who will aways make sure that you are entertained.

Q: Can you start out by telling how you got started in the sport?
A: The way I got started was my manager Ben Schissler, he is actually my significant other, he had been doing Muay Thai for many years. He went to Wyoming as there was this little 105 pound chick who was insulting towards him and saying she could beat up any 105 pound chick he trained. So he came home and said "Hey you wanna do some MMA". I trained and went home with a TKO, sent her home with twelve stitches from a standing elbow and ever since then I have loved it.

Q: Was the plan to keep fighting or at the time was it planned to be a one time thing?
A: Well, it was planned to be a one time thing. What happened was, my manager and boyfriend Ben is predominantly Muay Thai. So he said "we will do an MMA fight if you agree to a Muay Thai fight." So it was gonna be one MMA and one Muay Thai. I never got the Muay Thai fight with the girl, but I don't blame her haha.

Q: MMA is not a sport a lot of parents might understand, especially with a daughter. Is it something your family was o.k. with?
A: At first I don't think they thought too much of it and didn't think it was one of those things I would involve in my life. Something I would try and get away from. I ended up thriving in it and enjoying the training, and now they see the commitment I have and are one hundred percent behind it. At first it was "you bar brawl", but now they see how much training I put into it and things like that. My dad comes to every fight and they are really supportive. 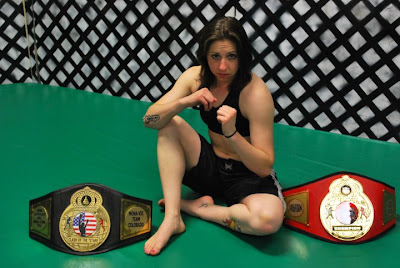 Q: I aways say you are one of my favorites because win or lose you are always exciting. Is that something that is important to you?
A: It really is. I really strive to be entertaining, I believe people want to watch entertainment, they don't want to watch you lay on someone or run from someone. That's one of my biggest things, win or lose, as long as I entertain you guys, that's all I care about.

Q: In August you won a fight I wish more people would see, by decision over Angelica Chavez. To me, it was your best performance, would you agree?
A: I would. That fight was a great test of my ground skill. I had just lost to Lacey Schuckman at 110 pounds by rear naked choke. She was a bit heavier and bigger than I expected and it really pushed me to tighten my ground game and put more into the Jiu-Jitsu and Wrestling aspect of my game. Without the loss against Lacey, I don't think I would have had the great performance against Angelica. I do believe it was one of my best performances and I learned a lot. Even though I won, I try to learn from it and still watch it to this day and critique it.

Q: Coming off that loss to Lacey, did you feel you had something to prove?
A: You know, I did. When I first started MMA, I was gonna fill in for one of her fights, I don't weigh 115 pounds wet, and it was set for 115. Something happened with the blood work not getting sent in time and the fight didn't go through. I was gonna fight her and her being one of the good Colorado fighters, I want to fight the best of the best. The fight didn't go as I wanted it to go but I learned a great lesson from it. So I did feel I had something to prove, just to myself. I watched Lacey win her belts and looked up to her, and still do, we are training partners now and we are friends. I did feel I had something to prove. Getting in the cage with Lacey was big for me, I was 2-0 and she was I think 6-3. Its good to mentally put myself through things like that.

Q: Angelica was the home town girl and had the crowd behind her. Does the crowd being so solidly behind the other fighter give you more motivation?
A: It does, I like being out of state. It takes the pressure off of me. When I fight in town, my biggest fear is disappointing people. Going back to your question about entertaining, I do, because I don't want to be a disappointment, I strive to be entertaining. I enjoy it, it feels like I have less pressure. When I fought Caroline Portugal, the Florida crowd was mean to me. They were cursing, telling me they were taking my belt, flipping me off, but I enjoy it, negative or positive energy, I take it in either way. 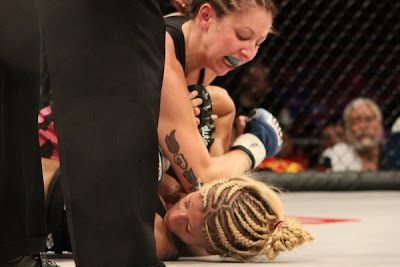 Q: With her being the home town girl, were you worried she would get the decision, even though you clearly won?
A: I absolutely was. The first question I asked my corner man was "Do you think I won", and he said "if you didn't, it was a home town decision". So the first thing on my mind was "oh crap I went to a decision with the home town girl".

Q: After that, you recently loss to Michelle Waterson by rear naked choke, what went wrong in that one?
A: I don't feel I performed poorly by any means. That choke she got on me was super super fast. I was dominating until the last four seconds. I had a hard time dealing with it because the fact I performed so well and did everything I wanted to, it was hard to deal with. SO I went home and researched, I am a reader and read a little bit. The thing that stuck in my head was how Muhammad Ali would every time he lost, think of three things he could have done different. That's what I do for myself and then I move on. There are lessons learned. I definitely want a rematch because I don't think it will go the same way, but other than that, I don't feel my performance was poor. I got the better of the exchanges and was more aggressive. So I have to chalk it up to I got caught. I never understood that meaning, but with that fight it was like "now I know what people mean when they say that".

Q: Is a loss in a fight you feel you were winning harder to get over than a fight where you could say "that girl kicked my ass"?
A: If someone is gonna kick my ass fair and square, so be it, I will give you that. I am not taking anything away from Michelle's hoke, not saying she got lucky. I feel I performed better than she did. I will be honest, I have never felt fear like that in any of my opponents, and that fear was also her drive, and I think that has something to do with the ending. So it was harder to swallow than someone just kicking my ass.

Q: Outside of your own fighting, the big one coming up is Miesha Tate vs Ronda Rousey. Any idea how that will go?
A: I really think that cage time will matter. The time put in, higher record, will make a big difference, I really do.

Q: Also, the Cyborg situation, as a female fighter does that have a negative affect on women's MMA?
A: It does, but MMA in general, men do it to. There is no difference in the steroid usage. But realistically when you look at Cyborg, what do you think? So was it a shock? No. Is Cyborg a good fighter? Yes. Could she do it naturally? I think she could. If her story is true then so be it, but you gotta know at that point in your career what is going into your body. It was disappointing but she is paying the consequences. I think its a negative on MMA period, just made worse for women because its still so new.

Q: How much does it take away from what she has done?
A: It puts a mark on her name. If you don't have someones word then you don't have trust. As fighters, we all go off each others words, this is a fair sport and a small word. It will affect her a lot. I know now she is part of that Pink Promotion, but as far as her fighting career it has to affect it. 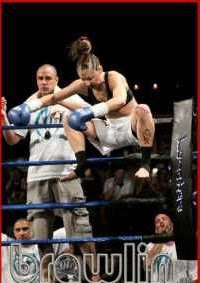 Q: As far as yourself, anything coming up?
A: Nothing signed. But something fro April or July, but noting is signed so want to keep that opponent under wraps.