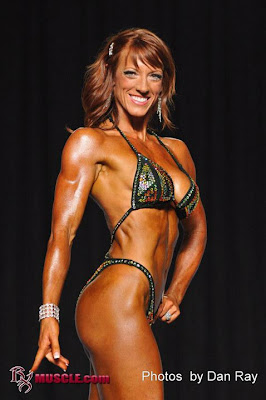 Crystal Wheeler has been in the gym since a very young age. She did powerlifting and then even before the age of eighteen did a bodybuilding show. Recently he has been competing in figure, but realized physique may be better suited for her. So now she is training to make her physique debut this year with the hopes of an eventual pro card. Will she get it? Only time will tell, but it would be impossible to doubt she has the right attitude towards achieving her goal. There is something I learned from this interview about Crystal. Sometimes in this industry you meet people and they exceed expectations, and sadly, sometimes they don't live up to expectations. Crystal quickly became someone, just by talking to her, that you cant help but root for. With Crystal, I knew f her, but knew little about her, so I didn't really have any "set" expectations. But she was pleasant to talk to and as I said, just easily became someone you have to root for.

Q: Can you talk about what initially got you into the gym?
A: I actually started when I was about fourteen, kind of working out and everything. I wanted to set myself apart from everyone else at school, they were all athletic, and I wanted to do something different. I got into powerliftng and at the age of fifteen and I think even sixteen I set four American and four World records in powerlifting. From there, a friend of mine was joking around and said "why don't you try something more challenging, like bodybuilding". So I competed in my first show when I was sixteen. So I was a sixteen or seventeen year old kid, not a ton of muscle, but for me, not bad at that age. We had a team of five of us who stuck with it. I took a break, had a family and everything, got divorced two years ago and got back into it.Is tarted with bikini and then figure and this year I will do physique at the NPC level and go for my pro card in natural bodybuilding. 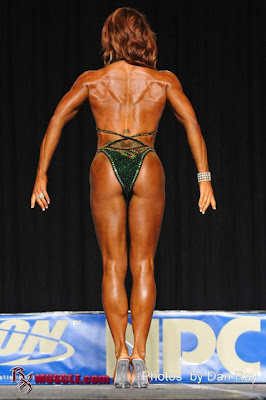 Q: Back when you started would you have ever imagined it getting to the point it is now for you?
A: I always knew I would do something in health and fitness and so did my family and friends. Its kind of funny because I grew up doing theater and dance, and that's what everyone saw me doing. But fitness and health and the aspects of it really tempted me a lot more. But I did not think I would still be competing at the age of thirty-one. It was expected I would do something in the field, but not to this extent. I am a trainer and I enjoy it, but this is a hobby for me, almost more than a hobby. I didn't see myself at this point, but I am glad its gotten here.

Q: At most gyms, women with your physique are still rare, do you get a lot of unwanted attention when you are there?
A: This is funny that you bring this up, because just recently there is a gentleman I encountered about two weeks ago. He said some things that I guess would be pick-up lines, they were a little bit crude. I am not a mean person, I see good in everyone. I gave him the benefit of the doubt. I vented about it a little to a friend at the gym, and last night I was working out and he was right on top of me everywhere I went. So finally I said something, I wasn't rude about it, but it was "you gotta stop". I would say that's the furthest extent its gone. There is staring going on, but I take that as a compliment and its how I have gotten a lot of clients.

Q: When you are training, do you have a specific routine?
A: I have a specific routine as far as what I lift on what days of the week because of ow my diet is right now. In the off season I change it up. People tell em I have ADD in the gym. If I don't have something set I am all over the place. I have a coach I work with, I don't like to do my own thing, I have one of the best coaches and teams I could imagine. I do what he says and it has not failed me. It keeps me in line so I cant go off the map. I like the accountability. 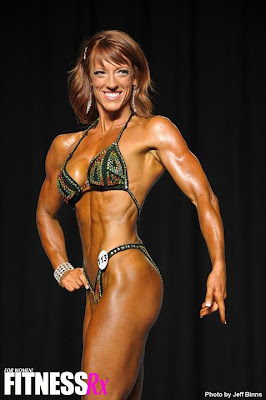 Q: When you compete, do you still get nervous?
A: Oh absolutely. A lot of people say "it will come natural to you, you have the theater and stage background". But its completely different. One of the first figure shows I did in 2010, I got on there and tripped on the stage as I walked off. I just smiled big and waved and kept going. Its not the first time its happened. I get so nervous I walk on stage and my legs shake uncontrollably or I smile so much I get those muscle twitches. Yeah, every show, its the same, there is always something going through your head. I wanna make sure I am doing the best I can do. So there is nervousness and anxiety.

Q: A lot of people say after the first time on stage it becomes addicting, was that the case for you?
A: Yes! I thought about how it was when I hit the stage. The team I am with, we have our own private facebook page. I looked at the comments and knew I couldn't let it go. There is a fine line between doing it as a hobby and an addiction, and it controlling your life. I have two kids who love what I do, my daughter wears my heels and poses, they have shirts that say "welcome to the gun show", they love it, and no matter what I do it does not go past a hobby, because I have to put my kids first. But there is an addiction and as long as my body allows it and I keep my priorities straight, I will keep doing it. 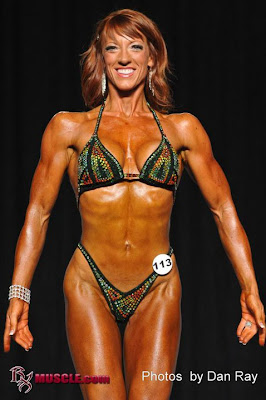 Q: Last year you did Jr. nationals, how was a National show different than another show?
A: So much competition. It was my first National show. I had no idea what the judges wanted. I went out and did the best I can. There was a lot of nervousness because you are being judged on every level. It messed with my head. There were twenty-seven girls in my line-up alone. Its a whole different ball game. At the regional level I am more comfortable. The judges can make or break you. It was a great experience, but a lot different.

Q: When I saw your pics from that show it seemed you had the body frame to hold a lot more muscle, and you say your switching, why did you decide to?
A: Because of exactly what you just said haha. I do have the frame to hold more muscle. I have held more muscle. I was dropping weight like crazy. I was 123 pounds and now am holding steady at 151. My goal was to put on more muscle, I didn't like looking so thin, I got into it in the first place to have more muscle. I want to change it up and do the bodybuilding side of the natural realm and get a pro card in that. I like the challenge of adding as much muscle as you can and seeing how long you can hold onto it.

Q: To train for figure and train for bodybuilding, do you have to change your training?
A: It is on the same level. But I find with bodybuilding the diet might be a little different, the way I train is different as far as more reps with higher weight. Yesterday I was doing hammer curls and lifted so heavy I got to the point where I couldn't bring it back up. I m taking on more weight than with figure. Figure now, depending on which organization you compete in, in natural shows like NANBF or NGA, they want that muscular figure look. The NPC shows, they don't want so much muscularity and definition. They want it toned down now. That's another reason I decided to step it up. I like the muscle gains, I enjoy it. I am lifting heavier than I have in a long time.

Q: Have you given any though to what shows you will do?
A: Yes, August 4th I will do the Arkansas State Championships in physique and then September 17th I think, in Kansas City, that's the show where you can win your pro card in bodybuilding, so that's the big one. 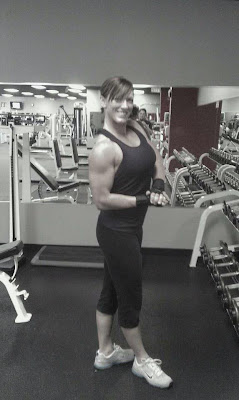 Q: Before we finish, anyone you want to thank?
A: Yes, John Gorman and the rest of Team Gorman. He is fantastic, the whole team is. Its not a team its a family. They are the best to work with. My friend Christina, a figure girl, she has had y back for the longest time. Without them I would have no motivation. And my kids, they have so much patience and understanding.
Posted by JasonDBK at 12:40 PM