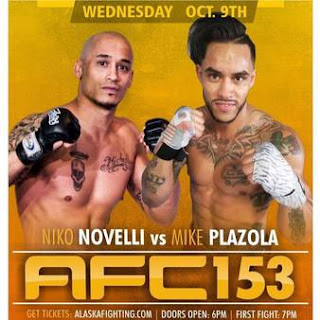 AFC 153 took place October 9th from Alaska Airlines Center in Anchorage, Alaska. In the night's main event Niko Novelli defeated Mike Plazola in round two. Round one was mostly Novelli using his ground game to control Plazola, land some punches and look for submissions. Round two started out the same till it went back to the feet. Plazola seemed to injure himself landing a kick and went to the ground where Novelli landed strikes forcing the ref to step in. Here are all your results and our Of The Night Awards.

Submission of the Night: Marv Alexie

Knockout of the Night: Niko Novelli

Fight of the Night: Niko Novelli vs Mike Plazola
Posted by JasonDBK at 5:49 PM