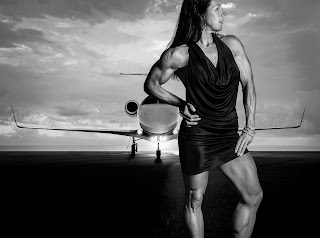 After trying out the physique division last year, Leslie Jones realized bodybuilding was where she belonged. Just recently she won the Charlotte Cup to regain her National qualifications for bodybuilding. In fact, she went out and won while doing her routine to a different song than she was supposed to, something that could throw some competitors off. Her goal is a pro card, but she herself states she doesn't know if she can get it. I however will say that her obvious hard work ethic and physique that she definitely has what it takes to walk away with a pro card at some point.

Q: Can you talk about how you got started in the gym?
A: It wasn't till after college. I got my first real job and a girl said "do you wanna go to aerobics?" and I said "o.k., sure!" I got completely addicted. I was your typical 80's aerobic instructor. I became a teacher and taught five, ten twenty classes a week. Then I moved to Germany and continued to do that but met someone who asked me if I wanted to lift weights. I had never done that before but that was the end of my aerobics career. I never left the weight room after that. That was twenty-something years ago.

Q: When you first started with the weights, did you ever imagine adding the muscle you did? Was it a goal?
A: Oh my gosh, no! I just did it because I liked the gym. When she got me started I was hooked. I never had that vision.

Q: What led you to competing?
A: That came much later. I remember I used to watch when they put the fitness stuff on ESPN. I was always fascinated by it. I didn't know how to go about it till a few years ago I found somebody to help em take that first step. 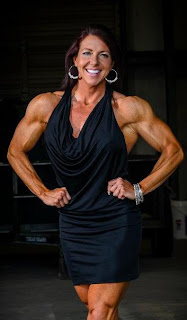 Q: Were you nervous the first time?
A: That is an understatement. I was honestly looking around in my suit thinking "how can I get out of here, where can I go?" I was so nervous.

Q: A lot of people I interview say after the first show it becomes addicting, was that the case with you?
A: Absolutely! To the point of a little too much, but I didn't realize that at the time.

Q: Was there something specific or just the whole experience?
A: Nothing really specific. Even though I was so nervous and generally a modest person -my friends that were there couldn't believe I did it- but the first thing I did on the way home was ask when the next one is.

Q: Last year you tried physique, was there a specific reason?
A: I tried physique but I'm not doing that anymore. The reason was because in the NPC I felt like I would fit better so to speak in physique. But in the end, it's not really what I love.

Q: For physique, compared to bodybuilding, were there any big differences in your training or diet?
A: There weren't. I think the only thing I did differently was maybe that last week, I manipulated nothing, no sodium, water, anything, because I wanted to come in fuller because they don't want that dry, cut, ripped look. Other than that, my training and diet were about the same. 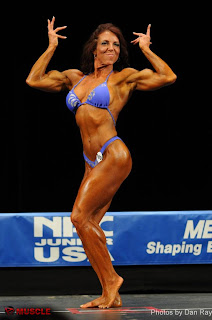 Q: You just took first at the Charlotte Cup and had a fun music experience, how did they lose your music and did it make you more nervous using a song you didn't even know?
A: I will say that this is the second time this has happened to me. The first time I had a Brittany Spears song and they couldn't get it to work or find it or whatever, but they gave me AC/DC, at least I knew AC/DC. I am an aerobics instructor, I am a count girl, so when they played the music and it wasn't mine I turned around and they said "just a minute." They played the girl's before me and it was slow and I looked and said 'I cant do slow." I understand that promoters tell you that if your music doesn't come on you go out and make work what you get. I was very nervous and felt it was a complete disaster but the people in the audience didn't notice. I didn't know the song, my whole set-up and counting went out the window. I just made sure to hit the mandatory poses. I know the night show is for entertainment.

Q: Music aside, how happy were you with what you brought to the stage?
A: I have to be honest here, not really very happy. I needed a few more weeks but I wanted to re-qualify for bodybuilding for the national level. I did physique and the time that has gone by expired. I wasn't a hundred percent happy. I was happy with what I got to but I most definitely could have done better if I had a few more weeks. I didn't wanna wait to our next state show in June.

Q: If you do Nationals, from this last show, is there anywhere you want to be better?
A: My back has been a work in progress for some time now. I work very hard on that. My back and glutes. Really, you cant make a whole lot of improvements in six months, it takes longer, but I will continue to work on that. My conditioning and amount of leanness I attained was not enough for bodybuilding and most certainly a National stage. I think the older I get, my prep needs to be longer, it takes longer to get where I need to be. 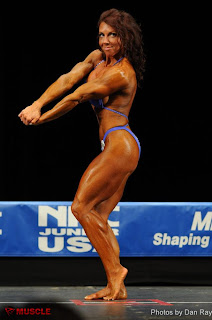 Q: When you are at the gym, do you get the stares and attention from people?
A: No because I go covered head to toe ninety-five percent of the time. Except I do live in North Carolina, so when it gets a hundred and fifteen degrees outside, when I do take my hoodie off because I am hot, yes I do get stares. But I have been there so long that most people know me or make comments like "wow, I didn't know you looked like that under those clothes."

Q: Is the pro card the goal or if it happens it happens?
A: I want it and would love for it to happen. I don't know if I can hold my own on an NPC stage as a female bodybuilder but I am certainly gonna try because I love doing it. It is the ultimate goal.

Q: If you could spend a day training with someone you have never trained with, who would it be?
A: Dana Linn Bailey. There are many physique I admire, but I have watched her videos and tried her workouts. The intensity she has is something I love. She doesn't just go and do four sets of ten, she really pushes and I admire that about her. 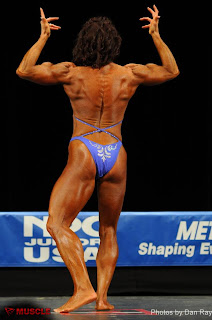 Q: Anyone you want to thank?
A: I need to thank J.J. Henry from J's Fit Factory, we are a team. I have had a lot of help from Ruben at Fit To Be In Your Kitchen, he is wonderful. My son because he is the only person who lives with me and deals with everything that goes on. He is eleven, but he is a great and a great reminder, I love him to death. My sponsors, Bill Porter at Max Muscle, Fayetville, Vermont Peanut Butter and Cape Fear Aesthetics.
Posted by JasonDBK at 12:55 PM